Abortion in the U.S. - Statistics & Facts

Abortion has long been a controversial subject in U.S. society. In 1973, the U.S. Supreme Court ruled that women had a right to have an abortion in the landmark Roe v. Wade case. Nevertheless, individual States were free to enact laws that restricted the practice and availability of abortion so access depended greatly on which state or region a woman lived. In this way, the tug-of-war between so-called “pro-choice” and “pro-life” advocates continued. However, on June 24, 2022, the Supreme Court overturned Roe v. Wade, allowing individual states to ban abortion completely if they so choose. In anticipation of the ruling, thirteen states already had "trigger laws" that automatically ban abortion, with other states likely to completely ban the procedure. The Supreme Court's decision was not a complete suprise as a leaked memo from May 2022 suggested they were to make this decision, but the announcement in June still led to protests across the United States. A survey of U.S. adults just weeks before the announcement found that only 33 percent wanted to see the Supreme Court overturn Roe v. Wade, while 49 percent of respondents did not want to see Roe v. Wade overturned.

How many abortions take place in the U.S. each year?

Despite the debate and difficulties surrounding access to abortion, thousands of women have legal abortions in the United States every year. In 2019, there were approximately 630,000 legal abortions reported in the United States. At that time, the abortion rate in the U.S. was highest among women aged 20 to 24 years with around 19 legal abortions reported per 1,000 women in this age group. However, the abortion rate among this age group has decreased significantly over the past couple decades. The U.S. states with the highest number of abortions in 2019 were New York, Florida, and Texas. In that year, there were around 78,587 abortions performed in the state of New York.

Are more people "pro-life" or "pro-choice"?

Public opinion in the U.S. remains divided on the issue of abortion. A survey from May 2022 found 55 percent of Americans considered themselves pro-choice and 39 percent considered themselves pro-life. The same survey found that younger adults were more likely to support making abortion legal under any circumstance, with 53 percent of those aged 18 to 29 believing so, compared to just 25 percent of those aged 65 and older. Furthermore, college graduates were much more likely to support making abortion legal under any circumstance than those who did not attend college. Unfortunately, the issue of abortion is such a divisive topic in the United States that it has lead to instances of violence. From 1970 to 2020 there were 260 abortion-related terrorist attacks in the United States, making abortion-related facilities the fourth most common target of terror attacks in the United States during this period.
This text provides general information. Statista assumes no liability for the information given being complete or correct. Due to varying update cycles, statistics can display more up-to-date data than referenced in the text.
Published by Statista Research Department, Nov 14, 2022

Support for abortion by age and level of legalization U.S. 2022

Number of abortions reported among teenage girls in the U.S. 2020, by gestation week 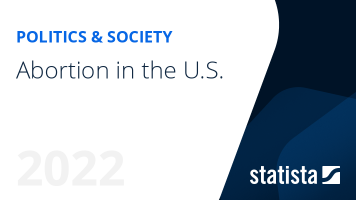 Go to report Abortion in the U.S.
Top Seller

The most important key figures provide you with a compact summary of the topic of "Abortion in the U.S." and take you straight to the corresponding statistics.