Since the introduction of the first automatic washing machine built for domestic use in 1937 and the commercial release of the first electrically powered dryer in 1938, both appliances turned out to be a staple across households in developed countries. More than 80 percent of households in the United States own a washing machine, for example, with even higher ownership rates in countries like Germany, Russia, Spain, the UK, Canada, Italy, Japan, and Turkey. With global annual revenues from washing machines and dryers sales to exceed 70 billion U.S. dollars in the future, the segment is a major part of the household appliances industry.

China is the largest market for washing machines

With the industry for “smart appliances” expected to grow in the future, washing machines account for a big part of the global smart home appliances market. Today, around 10 percent of households in the United States already own a big smart appliance such as refrigerators or washing machines. This ownership rate is projected to increase as the smart washing machine market is forecast to grow from around eight billion U.S. dollars in 2020 to more than 20 billion U.S. dollars over the next five to seven years
This text provides general information. Statista assumes no liability for the information given being complete or correct. Due to varying update cycles, statistics can display more up-to-date data than referenced in the text. 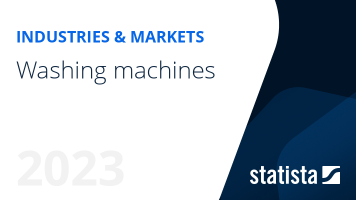 The most important key figures provide you with a compact summary of the topic of "Washing machines" and take you straight to the corresponding statistics.