Smart appliances are a category of smart devices connected to a wider network, for example, via WiFi or a mobile connection. Smart appliances are usually part of a broader set of technologies and devices used in a smart home. They can help with lowering water and electricity usage, as well as helping to make device usage easier and more comfortable.
Any traditional small or major home appliance, like washing machines, refrigerators, coffee machines, and food thermometers, can be a smart appliance as a connected device in the Internet of Things network.

As the market for smart appliances continues to grow, household penetration is naturally rising as well. While around 3.4 percent of households worldwide owned a smart appliance in 2020, this share is forecast to more than triple over the next five years.
The adoption of smart appliances varies though from country to country. According to Statista’s Global Consumer Survey, the ownership rate of smart appliances in India, China, and South Africa is significantly higher than in European countries like France, Germany, and the United Kingdom.
This text provides general information. Statista assumes no liability for the information given being complete or correct. Due to varying update cycles, statistics can display more up-to-date data than referenced in the text. 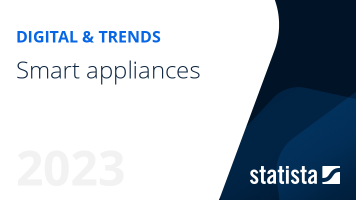 The most important key figures provide you with a compact summary of the topic of "Smart appliances" and take you straight to the corresponding statistics.