Languages and education in the United Kingdom - Statistics & Facts

Published by D. Clark, Sep 10, 2021
There is no denying that the United Kingdom is a linguistically diverse nation, with languages from all over the globe spoken within its borders. However, English native speakers are often criticized, as most cannot speak another language. Education is often held to blame as the root of the problem, as not enough pupils are encouraged to take a language subject at school.
It is not compulsory to study a language in post-16 education, and the numbers of students studying a European language at A level (Higher level in Scotland) have been falling across the United Kingdom in recent years. The latest figures show that, although French is still the most popular modern foreign language choice, only 3.6 percent of students in England chose to study it in 2014. Comparable data for other countries shows that 4.1 percent of Welsh A level students studied French, 6.5 percent in Scotland and 4.2 percent in Northern Ireland. On the other hand the number of final year pupils taking Spanish in the United Kingdom has been increasing in all countries except Wales.

However, the number of Modern Foreign Language students does not paint the full picture of the UK’s linguistic education. Regional languages also play an important role, including Welsh, Gaelic, Irish and British Sign Language, among others. Welsh is protected under the 2011 Welsh Language (Wales) Measure, and as such is the only language to enjoy de jure official status in any part of the United Kingdom. In the academic year 2013/2014, just under a quarter of Welsh primary school pupils were taught in Welsh, compared with 1.9 percent in Irish in Northern Ireland, and 0.6 percent in Gaelic in Scotland.

Furthermore, the numbers of pupils from non-English language backgrounds, that is to say children who have been exposed to other languages in the home during their childhood, have increased dramatically in recent years. In England, this figure has more than doubled from 7.8 percent in 1997 to 18.7 percent in 2014, while reaching 55.8 percent of primary school children in Inner London.

In the following 8 chapters, you will quickly find the 49 most important statistics relating to "Languages and education in the United Kingdom".

The most important key figures provide you with a compact summary of the topic of "Languages and education in the United Kingdom" and take you straight to the corresponding statistics.

Languages in the United Kingdom

English and social integration in the United Kingdom 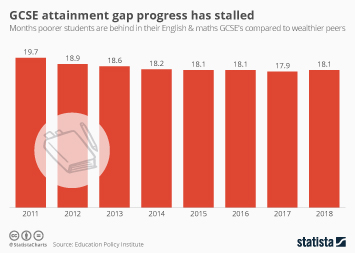