Stevia is categorized as a natural sweetener which can be derived from the leaves of the Stevia rebaudiana plant and is used as a sugar substitute. The active parts of stevia are steviol glycosides which are estimated to be 200 to 300 times sweeter than sugar, supply no calories or carbohydrates, and have no influence on the glycemic index.
Stevia’s global market value was forecast to reach over 770 million U.S. dollars by 2022. This upward trend is also shown by the increasing number of global food and beverage product launches that contain stevia. In a regional comparison, Chile, the United States and France had the highest consumer awareness of stevia.

The usage of stevia in the American food industry is regulated by the U.S. Food and Drug Administration (FDA). Whole leave stevia or crude stevia extracts have not received approval for commercial use in the United States, but the highly refined sweetener compounds such as stevioside or rebaudioside A were approved as Generally Recognized As Safe (GRAS). These ingredients are used among various food categories and as a base for table-top sweeteners. Splenda was the best-selling stevia-based table-top sweetener brand in the United States, followed by Truvia and Sweet'N Low.

This text provides general information. Statista assumes no liability for the information given being complete or correct. Due to varying update cycles, statistics can display more up-to-date data than referenced in the text.
Published by Statista Research Department, Nov 17, 2021

Number of food and drink launches with stevia worldwide
3,526

Global growth of stevia as an additive in drink launches
33%

Most used brands of sugar substitutes in the U.S. 2020 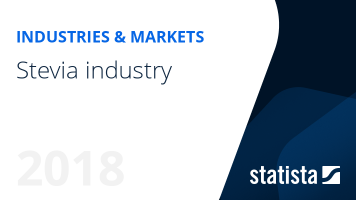 The most important key figures provide you with a compact summary of the topic of "Stevia industry" and take you straight to the corresponding statistics.