Published by
Koen van Gelder,
Jan 12, 2022
Smokeless tobacco, also known as dip, chew, snuff, or chewing tobacco, comes in two forms. Chewing tobacco comes as loose leaves of tobacco, as plug tobacco (brick form), or in a twist form. Snuff is finely ground (powdered) tobacco that is sold moist, dry, or in tea bag-like pouches called sachets. The term smokeless tobacco implies use of unburned tobacco in the finished products. A variety of smokeless tobacco products are available, for oral or nasal use. Products intended for oral use are sucked, chewed, gargled or applied to the gums or teeth, while fine tobacco mixtures are usually inhaled into the nostrils.

In the following 3 chapters, you will quickly find the 20 most important statistics relating to "Smokeless tobacco in the United States". 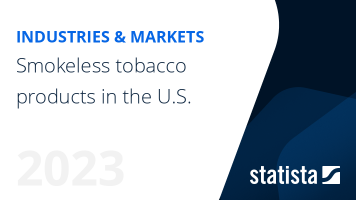 The most important key figures provide you with a compact summary of the topic of "Smokeless tobacco in the United States" and take you straight to the corresponding statistics.