Philip Morris International had its humble beginnings as a tobacco shop in 19th century London opened by the eponymous Philip Morris. It has since grown into a multinational giant; one of the largest cigarette and tobacco manufacturing companies worldwide. Its most widely recognized brand, Marlboro, was worth nearly 36 billion U.S. dollars as of 2021, far more than any other cigarette brand. Philip Morris International, as a whole, claims a 14 percent share of the global cigarette market, second only to China National Tobacco Corporation.

State of the company

In the United States, there has been a concerted effort to reduce cigarette consumption among the youth by highlighting the consequences of tobacco and nicotine consumption. In addition, there are laws putting restrictions on advertisements for tobacco products, and in some states in the U.S. there are taxes as high as 4.50 U.S. dollars per pack of cigarettes in order to deter individuals from smoking. All of these factors have caused cigarette smoking to decrease significantly since the year 2000, with only about 14 percent of Americans being current cigarette smokers.
This text provides general information. Statista assumes no liability for the information given being complete or correct. Due to varying update cycles, statistics can display more up-to-date data than referenced in the text.
Koen van Gelder
Research expert covering Tobacco and Meal Kits
Get in touch with us now
Published by Koen van Gelder, May 10, 2022

Net revenue generated by PMI in the EU
8.2bn USD

Ranking of the most valuable tobacco brands worldwide 2022 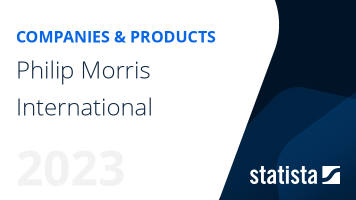 The most important key figures provide you with a compact summary of the topic of "Philip Morris International" and take you straight to the corresponding statistics.