The MLB franchise New York Yankees played its first game in 1903 as New York “Highlanders”; a name they carried until 1913. Since 1973, the Yankees have been owned by the Steinbrenner family. The Yankees have the most championships of all MLB teams, having won the World Series a total of 27 times. This is more than twice the number of wins than the second-ranked team, St. Louis Cardinals, and more than three times than its division rival Boston Red Sox. Over the years, several Yankees players, such as Babe Ruth and Yogi Berra were inducted into the Baseball Hall of Fame.
Since the early 2000s, the New York Yankees almost tripled their revenue, generating more than 680 million U.S. dollars in revenues in 2019. The team is the most valuable MLB franchise, with a value of five billion U.S. dollars in 2020. This is roughly three higher than the average MLB franchise value. The Yankees are also amongst the most valuable and popular sports teams worldwide.

More than three million people attend games of the New York Yankees each season at the new Yankee Stadium, which was opened for the 2009 season. The average regular season attendance was at around 40 thousand over the past few years. The average ticket price for games of the New York Yankees has remained relatively stable over the past few years at around 50 U.S. dollars and actually decreased to under 50 U.S. dollars for the 2019 season. The Yankees are also very popular on social media as the team’s accounts on Twitter and Facebook are the most followed and liked of all MLB teams.
This text provides general information. Statista assumes no liability for the information given being complete or correct. Due to varying update cycles, statistics can display more up-to-date data than referenced in the text.

Christina Gough
Research expert covering sports and video gaming
Get in touch with us now
Published by Christina Gough, Jun 9, 2021 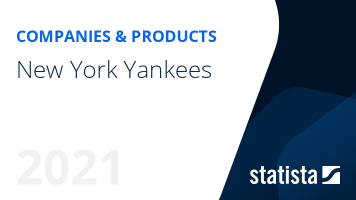 The most important key figures provide you with a compact summary of the topic of "New York Yankees" and take you straight to the corresponding statistics.