The MLB franchise Boston Red Sox was founded in 1901. The then-called “Boston Americans” won their first World Series championship in 1903. After that, the Red Sox won eight more World Series championships, placing them amongst the top three teams with the most titles in the MLB. The Boston Red Sox are majority owned by the Fenway Sports Group.
The Boston Red Sox is the third most valuable franchise in the league. In the past five years the Red Sox franchise value has increased significantly, increasing from 2.7 billion U.S. dollars in 2017 to 3.9 billion U.S. dollars in 2022. The revenue of the Boston Red Sox has also consistently grown over the last few years reaching more than 519 million U.S. dollars in 2019. Revenues dropped to 152 million as a result of the COVID-19 pandemic, before showing signs of recovery in the 2021 season. Despite the fact that the Red Sox have the highest average ticket price, less than half of this revenue was generated by gate receipts in 2021.

The average attendance at Red Sox games was at 32,408 in the 2022 season, marking a total attendance of 2.63 million. Along with the New York Yankees, the Red Sox is one of the most popular MLB franchises on social media, having the second highest number of Facebook fans and the fifth most Twitter followers in the league.
This text provides general information. Statista assumes no liability for the information given being complete or correct. Due to varying update cycles, statistics can display more up-to-date data than referenced in the text.

Christina Gough
Research expert covering sports and video gaming
Get in touch with us now
Published by Christina Gough, Dec 8, 2022

Revenue of Major League Baseball teams in the U.S. 2021 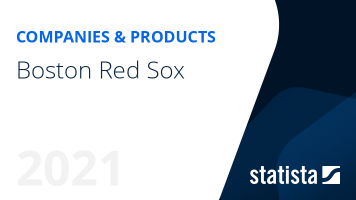 The most important key figures provide you with a compact summary of the topic of "Boston Red Sox" and take you straight to the corresponding statistics.