Published by
Christina Gough,
May 4, 2021
Major League Baseball (MLB) is a professional sports league in North America made up of thirty teams that compete in the American League and the National League. The two leagues operated separately from the early twentieth century until their merger in 2000, after which they became a single organization that is headquartered in Manhattan. MLB was the second most popular men’s professional sports league among U.S. fans in 2019, ranking after the National Football League (NFL). Each of the thirty teams in the MLB are franchised, and the MLB’s average franchise value has grown year over year for over a decade. The league’s average franchise value reached roughly 1.85 billion U.S. dollars in 2020.

The Los Angeles Dodgers, the team with the highest revenue in Major League Baseball in 2020, generated around 185 million U.S. dollars of revenue that year, although this was much lower than the previous year as a result of the coronavirus (COVID-19) pandemic. Revenue from television and media rights is also an important stream of revenue for MLB. Broadcasting deals with TBS, ESPN and Fox, starting with the 2014 season, will bring in around 12.4 billion U.S. dollars in total revenue through 2021. In terms of franchise value, however, the Dodgers ranked second, behind the New York Yankees. The Yankees were the most valuable franchise in MLB, with an estimated value of five and one quarter billion U.S. dollars in 2021. The Yankees are also the MLB team with the most World Series Championship wins as of 2020, and have won 27 times.

How did the COVID-19 pandemic impact Major League Baseball?

Due to social distancing regulations as a result of the coronavirus (COVID-19) pandemic, the number of people allowed to attend large events was severely restricted in 2020. As a result, the start of the 2020 Major League Baseball season was postponed from March until July. Only 60 games were played from July to September, much less than its extensive regular season and the shortest MLB season in over a century.

Prior to the pandemic, MLB’s total attendance had been declining in recent years, but there was no attendance in the 2020 season due to the fact that all games were played behind closed doors to comply with social distancing measures. Similarly, though the league's gate receipts reached 2.86 billion U.S. dollars in 2019, there were no gate receipts in 2020. That being said, if it were possible to attend games in 2020, the average ticket price for an MLB game would have been around 34 U.S. dollars. This average price has been increasing year over year since 2006, when the price was just over 22 U.S. dollars.

In the following 6 chapters, you will quickly find the 44 most important statistics relating to "Major League Baseball (MLB)".

The most important key figures provide you with a compact summary of the topic of "Major League Baseball (MLB)" and take you straight to the corresponding statistics. 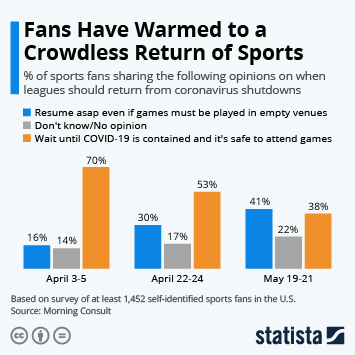 Fans Have Warmed to a Crowdless Return of Sports 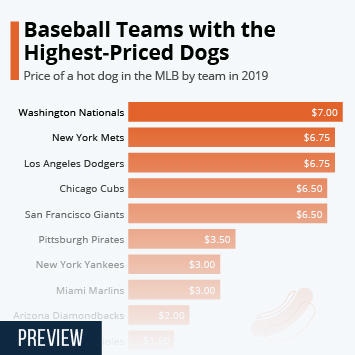 Baseball Teams with the Highest-Priced Dogs