Published by
Christina Gough,
Mar 2, 2021
The sports industry is a large and profitable industry for several stakeholders – athletes, major sports leagues, apparel brands, sponsors, as well as major events brands. Along with major events, competitive sports are usually divided into leagues or associations that promote and organize these tournaments. North America and Europe are home to some of the most valuable sports leagues in the world. For instance, the National Basketball Association (NBA), the National Football League (NFL), and Major League Baseball (MLB) are based in North America; the Bundesliga (Germany), Primera Division (Spain), and the Premier League (England) are major soccer leagues in Europe. The NFL franchise Dallas Cowboys is the most valuable sport team brand, while La Liga's Real Madrid CF is the most valuable soccer brand worldwide.
Thanks to endorsements worth around 64 million U.S. dollars with the likes of Nike and Coca-Cola , LeBron James of the Los Angeles Lakers is the highest-paid NBA player in 2021, and one of the highest-paid athletes in the world. In 2021, James’ income stood at more than 95 million U.S. dollars, the majority of which was generated from endorsements. On the soccer pitch, FC Barcelona's Lionel Messi was the highest paid soccer player worldwide in 2020, with Juventus' Cristiano Ronaldo taking second place. Among professional tennis players, Swiss legend Roger Federer leads the ranking of highest paid tennis players in the world, followed by Novak Djokovic, Rafael Nadal, and Naomi Osaka. In fact, Naomi Osaka topped the list of highest paid female athletes worldwide in 2020, earning herself 3.4 million U.S. dollars in prize money and a further 34 million U.S. dollars through sponsorship and endorsements.

Next to athlete endorsements, sporting events are also a major stream of revenue for the industry. The Super Bowl is the most valuable sports events worldwide, generating hundreds of millions in revenue each year. The average cost of a 30-second TV commercial during the big event cost an estimated 3.5 million U.S. dollars in 2021, illustrating just how valuable this event is to both brands and the sports industry as a whole. In 2020, revenue of the NFL league and team sponsorships amounted to an estimated 1.53 billion U.S. dollars, the highest figure to date and the highest revenue among sports leagues in the United States. The Olympic Games – both summer and winter competitions – and the FIFA World Cup are listed among the most valuable sports events brands worldwide as well. In 2018, the year that the FIFA World Cup took place in Russia, television broadcasting rights for the global soccer organization generated nearly 2.5 billion U.S. dollars in revenue worldwide.

In the following 5 chapters, you will quickly find the 35 most important statistics relating to "Sports Brands".

The most important key figures provide you with a compact summary of the topic of "Sports Brands" and take you straight to the corresponding statistics. 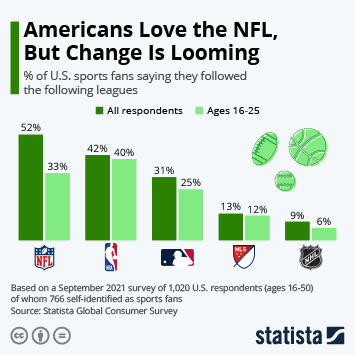