Published by
Aaron O'Neill,
Nov 28, 2022
The Netherlands is located in Western Europe on the North Sea, bordered by Germany and Belgium. The country’s name is quite appropriate, as about one quarter of the Netherlands is below sea level. The Netherlands is known for famous artists such as Rembrandt, Vermeer, Van Gogh and Mondrian, and for its long-time history as one of the most important maritime trading nations. In recent times, the Netherlands has also been a leading supporter of international cooperation.
The population of the Netherlands has been quite stable at around 17 million over the last decade, and around 90 percent of the population live in urban areas. The fertility rate only slightly dipped below 1.7 in 2013, while population growth also experienced a slump the same year. The average life expectancy of inhabitants is around 81 years, and the percentage of the population 65 years or older is growing, which proves a stable healthcare system and economy, but is placing higher demands on the welfare system.

The economy of the Netherlands is similar to that of the European Union as a whole. The rate of GDP growth in the Netherlands was negative during 2012 and 2013, but the economy was able to recover by the following year. GDP per capita, despite positive growth predictions for 2014, decreased slightly in 2015, before picking up again, and is now expected to be back to its previous state by the end of 2018. One reason for this may be that, due to negative and slow economic growth, the government has imposed austerity measures and has slightly reduced spending compared to revenue.

The economy of the Netherlands is largely based on the services sector, which is responsible for almost 75 percent of GDP generation. Employment across the sectors shows a similar distribution. The unemployment rate increased between 2013 and 2014, when GDP growth was negative, but it is expected to stabilize as the economy improves. Trade continues to play an important role for the Netherlands and the country boasts a positive trade balance which contributes to a stable economy. Imports and exports occur predominantly with Germany, Belgium, and the United Kingdom. Overall, the Netherlands is experiencing slow economic growth in a stable economy.

In the following 4 chapters, you will quickly find the 37 most important statistics relating to "The Netherlands". 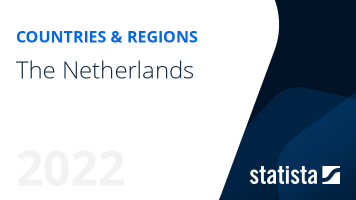 The most important key figures provide you with a compact summary of the topic of "The Netherlands" and take you straight to the corresponding statistics.

Traditional media in the Netherlands

Parliamentary elections in the Netherlands 2017

Banking in the Netherlands

Travel and tourism in the Netherlands 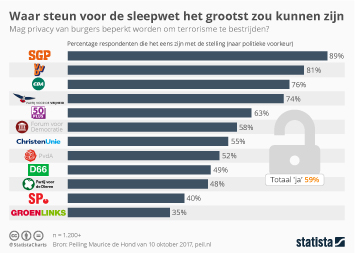 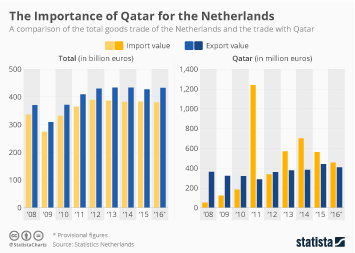 The Importance of Qatar for the Netherlands