With rising concern for the environment, people across the globe have become more involved in reducing their ecological footprint through various means, such as recycling. The used and second-hand goods industry, which involves the transfer of pre-owned items to a secondary consumer, has likewise increased in popularity in recent years. Specifically, the global second-hand apparel market was valued at approximately 33 billion U.S. dollars, a figure that is projected to nearly double in the next few years.

Canada is a wealthy country and one of the largest global traders of worn clothing and other worn articles. Ghana, Pakistan, and Kenya were some of the key destinations for used clothing exported from Canada, with a combined trade value of roughly 28 million U.S. dollars. When importing used clothing items, Canada acquired over 27 million U.S. dollars’ worth of second-hand clothes from the United States, making it the country’s leading import partner by far.

Canada was home to an estimated 1,400 used merchandise stores, many of which were located specifically in larger provinces, such as Ontario, British Columbia, and Quebec. In other words, no matter where the used items originally came from, many Canadian consumers generally did buy second-hand products. When asked whether they had bought second-hand at all in the past 12 months, approximately half of Canadians confirmed that they had. Some of the most common items purchased were clothing, various media, e.g., books and games, as well as furniture and household goods. About three-quarters of the country’s second-hand shoppers said that saving money was their reason for buying used goods, making it by far the leading motivating factor.
This text provides general information. Statista assumes no liability for the information given being complete or correct. Due to varying update cycles, statistics can display more up-to-date data than referenced in the text.
Tugba Sabanoglu
Research lead covering Non-food CG & Retail
Get in touch with us now
Published by Tugba Sabanoglu, Jul 26, 2021

Value of the secondhand apparel market worldwide from 2021 to 2026

Value of the secondhand apparel market worldwide from 2021 to 2026

Second-hand purchases by category in Canada 2022 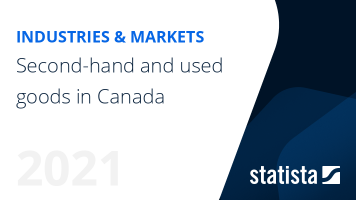 The most important key figures provide you with a compact summary of the topic of "Second-hand goods in Canada" and take you straight to the corresponding statistics.