In recent decades, globalization has made luxury goods and household items much more accessible. Goods that used to be more exclusive and harder to find, such as brand clothing and luxury cars, have been successfully increasing their market reach and sales. For instance, on a global scale, the amount of clothing sold has been increasing year on year, and the value of the personal luxury goods market has nearly quadrupled in the last 25 years. Whereas the increase in consumerism arguably benefits the global economy, there is a downside to ‘fast fashion’ and conspicuous consumption. They result in large amounts of waste, produce dangerous levels of carbon dioxide and often involve cheap labor. One way to tackle these issues is to resell and recycle consumer goods, in order to create a more circular economy. In the Netherlands, the second-hand market is already well-developed, and is expected to absorb even more of the 'traditional' retail market in the future.

The second-hand market in the Netherlands is not equally developed across all product segments. 12 percent of respondents to a widespread survey indicated that they often buy second-hand clothing. This indicates that the vintage clothing market has plenty of room to expand in the Netherlands, given its popularity in other markets. In contrast, used motor vehicles are quite popular. Over the last decade, the number of used cars and motor bikes sold in the Netherlands has increased almost every year. Other success stories include the markets for second-hand books and refurbished smartphones.

Much like in regular non-food retail, the trade in second-hand products predominantly takes place online. The Dutch prefer to both buy and sell their used items on the internet. Their preferred online marketplaces are Marktplaats (a subsidiary of Ebay) and Bol.com, the latter of which is the largest online retailer in the Netherlands. Leading global marketplaces such as Amazon, Ebay.com and Etsy play a marginal role in the Netherlands. Less than a quarter of Dutch consumers have even heard of Etsy, and Amazon did not launch a Dutch website until 2020. This shows that online retail in used goods has been relatively unaffected by global (American) conglomerates. Similarly, the offline second-hand product trade in the Netherlands is typically Dutch. Most brick-and-mortar (or rather, tarp-and-blanket) second-hand retail transactions occur during the annual King’s Day flea markets all across the Netherlands.
This text provides general information. Statista assumes no liability for the information given being complete or correct. Due to varying update cycles, statistics can display more up-to-date data than referenced in the text.

D. Tighe
Research expert covering shopping behavior, sports and leisure retail, and the subscriptions and direct selling industry
Get in touch with us now
Published by D. Tighe, Nov 9, 2022

Number of second-hand stores in the Netherlands
3,875

Number of second-hand stores in the Netherlands 2007-2020 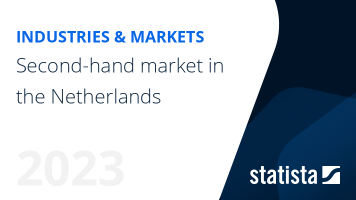 Go to report Second-hand market in the Netherlands
Top Seller

The most important key figures provide you with a compact summary of the topic of "Second-hand market in the Netherlands" and take you straight to the corresponding statistics.