The Transatlantic Trade and Investment Partnership (TTIP) was a proposed trade agreement between the European Union and the United States. Negotiations began in 2013 and were supposed to conclude in 2014 but stalled after former U.S. president Donald Trump halted negotiations, and the agreement was deemed obsolete by the European Commission in 2019. The aim of TTIP was to lower trade barriers between the EU and the US through proposed reductions in tariffs as well as reductions in regulatory trade barriers. A central negotiator in the EU claimed that the agreement would have been the largest and most comprehensive ever signed.

The agreement was controversial in both the EU and the US due to fears that TTIP would lower safety standards and negatively impact jobs on both sides of the Atlantic. Europeans, in particular, were concerned about the U.S. desire to have the EU follow its guidelines for chemical use which takes an innocent until proven guilty approach, rather than the EU’s practice of banning chemicals until they are proven safe.

Another main issue in contention was the U.S. desire for the EU to accept investor state dispute settlement provisions which would allow investors to sue governments for alleged violation of their investment rights due to legislation and regulation and would prohibit government courts from deciding the case. They would instead be decided by arbitrators in closed-door tribunals. The fear was that this process would effectively allow corporations to usurp the sovereignty of EU nations any time they made a law or regulation that impacted corporate profits, for instance laws with the aim of curbing climate emissions. In Germany, nearly half the population feared that TTIP would lead to weaker consumer protection and environmental standards. In the same country, voters of the Liberal and Conservative parties were most optimistic about the agreement, but also among these, a higher share of the respondents were negative than those who were positive.

Trade between the US and the EU

In 2020, the U.S. exported 231 billion dollars worth of goods to the EU and over 291 billion dollars worth of services. The U.S. imported roughly 197 billion dollars of services from the EU in 2020, and over 415 billion dollars worth of goods. However, the main import partner of both the U.S. and the EU is China. TTIP was estimated to increase trade across the Atlantic, but gross domestic product (GDP) increase in both regions was only estimated to be marginal. Furthermore, there were concerns raised about the social impact of practically letting European workers compete with U.S. workers.
This text provides general information. Statista assumes no liability for the information given being complete or correct. Due to varying update cycles, statistics can display more up-to-date data than referenced in the text.
Published by Statista Research Department, Sep 29, 2022

U.S. exports of services to the EU
291bn USD

Overview on the current trade situation

Projections on the effects of TTIP 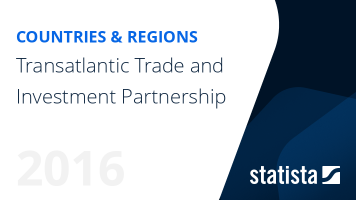 The most important key figures provide you with a compact summary of the topic of "Transatlantic Trade and Investment Partnership" and take you straight to the corresponding statistics.