Two main islands, the North and South island, in addition to a number of smaller islands compose the country of New Zealand. The islands are located in the South Pacific Ocean, with the nearest neighbor being Australia located to the northwest. The country features unique vegetation and a diverse landscape, featuring mountains, lakes, beaches and thermal springs attracting tourists all the year round.
New Zealanders are primarily of European descent, as Britain once had sovereignty over the island, but there are still slightly more than 730,000 Māori people - the descendants of early Polynesian settlers living on the islands. They amount to around 15 percent of the total population, which is around 4.8 million. Land issues between the Māori and the rest of New Zealand's population still remain controversial.

The large majority of New Zealanders live in urban areas. The largest city is Auckland, but Wellington is the capital and the sixth largest city. Both are located on the North Island. As is common in developed nations, the country has a relatively high life expectancy and a fertility rate which hovers around the natural replacement rate.

The economy of New Zealand is still recovering from the global recession, but GDP per capita is expected to steadily increase from 2015, and growth rates are moderate. Furthermore, over the past few years the government has been reducing the ratio of government expenditure to GDP, has seen a reduction in the unemployment rate and improved the budget balance - all of which have contributed to improving the economy.

The services sector is by far the strongest sector, in addition to offering the large majority of employment opportunities within the country. Tourism likely contributes to this. However, compared to most other developed nations, agriculture still plays an important role and it is, and has been, one of New Zealand’s mainstay export sources. Statista's Made-In-Country-Index 2017 found that products from New Zealand are especially popular in Asian countries and Australia, which comes as no surprise, as New Zealand's most important import and export partners include China, Australia and the United States.
This text provides general information. Statista assumes no liability for the information given being complete or correct. Due to varying update cycles, statistics can display more up-to-date data than referenced in the text.

New Zealand and the coronavirus 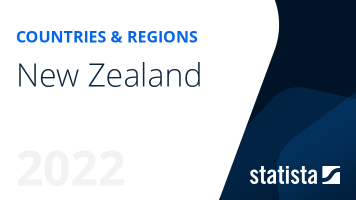 The most important key figures provide you with a compact summary of the topic of "New Zealand" and take you straight to the corresponding statistics.