Published by
Bruna Alves,
Jul 5, 2021
Entergy is among the leading players in the gas and electric utility industry in North America. The utility primarily operates in the deep southern regions of the United States. The company was established in November 1913 with the formation of the Arkansas Power Company, which was dedicated to bringing electricity to rural Arkansas. To produce energy, the founder, Harvey C. Couch, used sawdust from a lumber company in rural Arkansas.
As of 2018, Entergy was one of the largest electric utilities in the United States based on retail sales. Most recently, Entergy reported around 11 billion U.S. dollars of revenue. The energy company is headquartered in the Central Business District of New Orleans, but temporarily relocated after Hurricane Katrina hit the city in August 2005. Entergy employed over 13,500 people in the United States as of 2019. Entergy has subsidiaries across the southern U.S., including Entergy Arkansas, Entergy Louisiana, and Entergy Texas.

The company’s two main businesses are divided into its utility segment and the non-utility segment. Entergy Arkansas and Entergy Louisiana provide electricity to about 23,700 and 10,890 industrial customers, respectively. The American Customer Satisfaction Index (ACSI) is a national economic indicator based on customer evaluations of the quality of products and services using a scale of 0 to 100 and available to household consumers in the United States. With an index score of 75, Entergy was among the top twenty utilities with the highest customer satisfaction in the past.

In the following 4 chapters, you will quickly find the 17 most important statistics relating to "Entergy".

The most important key figures provide you with a compact summary of the topic of "Entergy" and take you straight to the corresponding statistics. 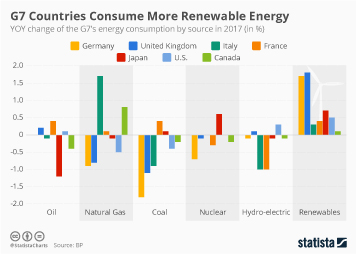 Change of energy consumption by source in G7 countries