Electricity in the U.S. - statistics & facts

Published by
Bruna Alves,
Sep 21, 2022
The electricity market in the United States is as diverse and complex as the vast landscape it supplies. It includes roughly two thousand privately and publicly owned providers, at different levels of vertical integration and regulation, providing a wide range of services. As of 2022, the country was home to six of the ten most valuable electric utilities in the world, with Florida-based NextEra Energy leading the global ranking.

In 2021, retail electricity sales in the U.S. amounted to some 3.8 petawatt hours. Electricity sales have mostly rebounded from the annual decline registered a year earlier amidst the economic slowdown caused by the coronavirus pandemic. In particular, sales to the residential sector – which accounted for around 40 percent of the national total – have experienced continual growth since 2019. Although the U.S. is the second largest electricity producer in the world, ranking only behind China, it has become increasingly more reliant on electricity imports in the past decade. In order to meet its demand, it imported more than two billion U.S. dollars’ worth of electricity in 2020.

How much does electricity cost in the U.S.?

In 2021, the average retail electricity price in the United States surpassed 11 U.S. cents per kilowatt hour. Despite being the highest price reported in at least three decades, the North American country still ranked among the mid-to-bottom tier of household electricity prices worldwide, far below that of countries like Germany, the United Kingdom, and Japan. Generation costs were the largest component of electricity prices in the U.S., followed by distribution.

Overall, electricity prices are influenced by a myriad of factors, including regulations, power plant operating costs, expansion and maintenance of transmission and distribution lines, and costs for fuels such as natural gas and coal (which make up the largest share of electricity generation in the U.S.). As a result, prices vary significantly across sectors and states. As a rule, the price of electricity for the residential and commercial sectors are usually greater than for industries, as distribution to the latter is more efficient due to the higher voltages used. In terms of regional distribution, due to its remote location and dependence on fuel imports for electricity generation, Hawaii had the highest residential electricity retail prices in 2022. In contrast, midwestern states such as Nebraska and North Dakota had some of the lowest prices.

In the following 6 chapters, you will quickly find the 30 most important statistics relating to "Electricity in the U.S.".

The most important key figures provide you with a compact summary of the topic of "Electricity in the U.S." and take you straight to the corresponding statistics.

Electric utilities in the U.S.

Energy prices in the U.S. 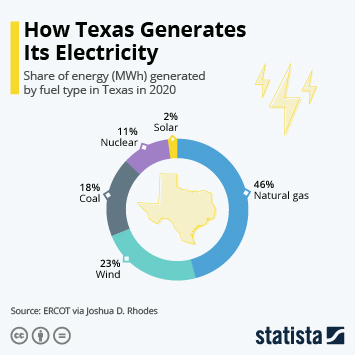 How Texas Generates Its Electricity 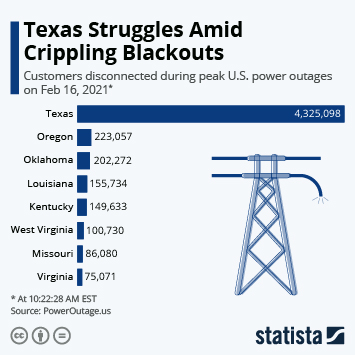