Published by Statista Research Department, Nov 17, 2022
Skincare, hair care, make-up, perfumes, toiletries and deodorants, and oral cosmetics are the main product categories of the cosmetic market. Since the early twentieth century, the production of cosmetics and beauty products has been controlled by a handful of multi-national corporations– L'Oréal, Unilever, Procter & Gamble Co., The Estee Lauder Companies, Shiseido Company, to name a few. In 2018, the U.S. was considered the most valuable beauty and personal care market in the world, generating approximately 89.5 billion U.S. dollars in revenue that year.

Popular brands in the U.S.

Given the size of the cosmetics market in the United States, consumers are faced with nearly unlimited options in terms of which brands to purchase, with several brands standing out as among the most popular. According to a 2019 survey, on social media, Huda Beauty had the highest user engagement with 246.37 million actions. Ranked second was Kylie Cosmetics which accounted for 215.24 million cross-platform actions. Based on retail sales, chain beauty store Ulta Salon, Cosmetics & Fragrance was one of the leading health and beauty retailer in the U.S. In 2019, Ulta generated approximately 7.4 billion U.S. dollars in retail sales. In that year, Sephora’s retail sales reached a total of 5.9 billion U.S. dollars. In recent years, e-commerce has played a greater role in the U.S. cosmetics industry. The share of online health and personal care sales as a percentage of total retail e-commerce sales was projected to increase from seven percent in 2017 to 8.6 percent in 2024. In the first quarter of 2018, Amazon's cosmetics category sales increased 20 percent compared to the previous year.

In the following 6 chapters, you will quickly find the 37 most important statistics relating to "Cosmetics Industry in the U.S.". 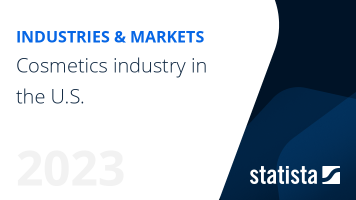 Go to report Cosmetics industry in the U.S.
Top Seller

The most important key figures provide you with a compact summary of the topic of "Cosmetics Industry in the U.S." and take you straight to the corresponding statistics. 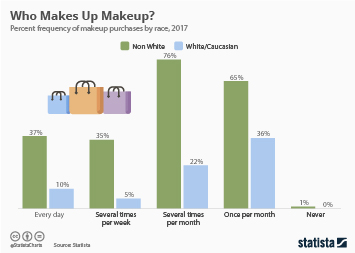 Who Makes Up Makeup? 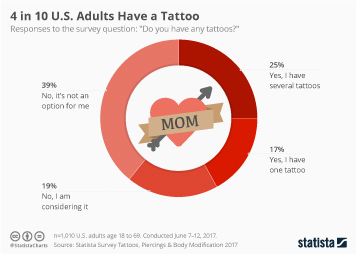