Published by
Mathilde Carlier,
Jan 25, 2022
The United States is one of the busiest countries in terms of road traffic with nearly 284 million vehicles in operation as of the third quarter of 2021. It was further reported that more than 228.7 million drivers were holding a valid driving license as of 2019. This level of traffic is one of the reasons leading to more road accidents: In 2019, there were some 12.15 million vehicles involved in crashes in the United States, with over half that volume being passenger cars. The number of road accidents per one million inhabitants in the U.S. is forecast to dip down in the next years, reaching just over 7,100 in 2025. A slower decrease is further tipped for the number of fatalities due to traffic accidents.

Injuries and fatalities on the road

In non-fatal crashes, drivers and motor vehicle passengers also recorded the most traffic-related injuries. This was in part due to the mass motorization in the United States, which recorded a higher number of cars and light trucks on the road when compared to other private modes of transport. The total number of injured people in motor vehicle crashes reported a sharp increase between 2015 and 2016, before dipping in 2017 and flattening through 2019.

Evolution and mitigation of the risk factors

Drunk driving and speeding were two of the main road accident risk factors in the United States. In 2019, speeding-related accidents accounted for close to 9,500 traffic fatalities, while alcohol-impaired driving fatalities represented over a quarter of the deaths recorded that same year. 21 to 24-year-olds were the age group most at risk of being involved in an alcohol-impaired driving fatal crash, with over a quarter of the age group involved in these types of accidents in 2019. All 50 states have a .08 blood alcohol concentration limit for drivers, after which they are driving under the influence of alcohol.

Risk factor mitigation is one of the main concerns of the population. In a 2021 survey, U.S. consumers highlighted car safety as the most important characteristic when deciding on a new car, above fuel efficiency, high quality, and low prices. Vehicle seat belts and motorcycle helmets are some of the safety tools helping mitigate the risks on the roads. The U.S. recorded a stable seatbelt use, at 90.3 percent in 2020, but motorcycle helmet use dropped under 70 percent in that same year. State legislations vary regarding helmet use. In states requiring motorcyclists to wear one, a higher usage rate of helmets compliant with the Department of Transportation’s guidelines was recorded. These legislations also almost doubled the share of non-compliant helmet use when compared to other states, and the share of motorcyclists wearing no helmet shrunk from over 40 percent to under six percent in states with helmet requirements.

In the following 4 chapters, you will quickly find the 34 most important statistics relating to "Road accidents in the United States". 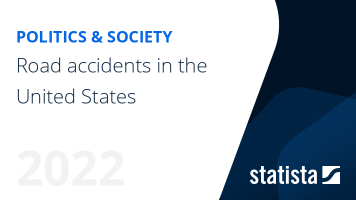 The most important key figures provide you with a compact summary of the topic of "Road accidents in the United States" and take you straight to the corresponding statistics. 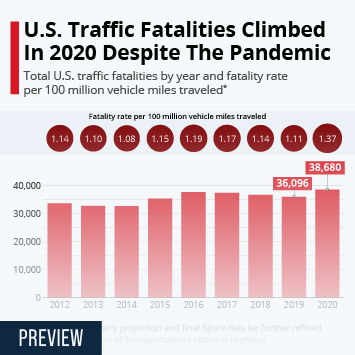 U.S. Traffic Fatalities Climbed In 2020 Despite The Pandemic 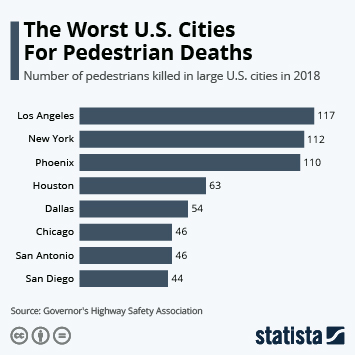