Published by
Martin Placek,
Sep 23, 2022
Autonomous vehicles, seen by many as the future of personal and public means of transport, are slowly gaining market share. In 2019, there were some 31 million cars with at least some level of automation in operation worldwide. In is expected that their number will surpass 54 million in 2024. Correspondingly, the global autonomous car market is projected to grow as well. While in 2021, the market was valued at over 24 billion U.S. dollars, it is projected to reach the size of nearly 62 billion U.S. dollars in 2026.
Despite bold proclamations from autonomous car manufacturers, fully autonomous cars may still be years ahead. One of the main reasons is the fact that the technology necessary to make fully autonomous vehicles an everyday reality is not yet advanced enough. Car manufacturers are, however, implementing some ready-to-use technologies into new vehicles, giving them a degree of autonomy in specific tasks.

The terminology surrounding autonomous vehicles is fragmented and inconsistent. The terms ‘autonomous’, ‘automated’, and ‘self-driving’ may be used interchangeably or to describe various degrees of vehicle automation. To standardize the language, SAE International published a six-level classification system based on the degree of driver intervention in 2014. Level 0 is used for vehicles with minimal automation that assists the driver in certain situations. At the same time, Level 5 stands for fully autonomous vehicles that can function without a human driver.

The field attracts established automotive manufacturers, tech companies, and specialized start-ups. Companies such as General Motors, Toyota, Nissan, Volkswagen, Ford, and Tesla have entered the market. Due to the complexity of developing autonomous vehicles, companies tend to set up joint ventures or acquire smaller companies to gain access to technological know-how and talent. The world of autonomous cars is, thus, becoming increasingly smaller. In 2016, for example, General Motors acquired the start-up Cruise, and in 2021, Toyota announced the purchase of Lyft’s autonomous car division. Argo AI, another start-up in the industry, has received substantial financial backing from Ford and Volkswagen.

In the following 6 chapters, you will quickly find the 37 most important statistics relating to "Autonomous vehicles worldwide". 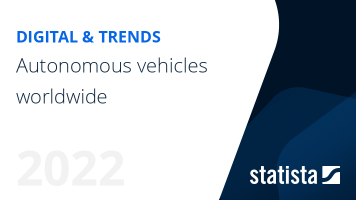 The most important key figures provide you with a compact summary of the topic of "Autonomous vehicles worldwide" and take you straight to the corresponding statistics. 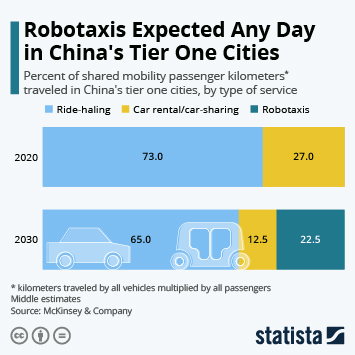 Robotaxis Expected Any Day in China's Tier One Cities 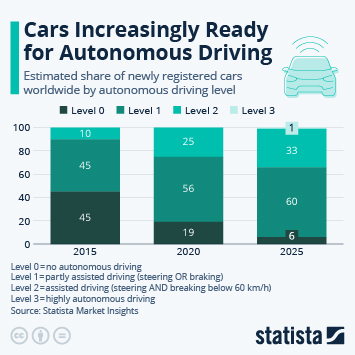