Flower market in the Netherlands - Statistics and Facts

Published by Statista Research Department, Sep 12, 2022
The flower market is a dynamic, fast-growing global industry, defined by three major components: growers, wholesalers, and retailers. The Netherlands is an important producer of cut flowers, as well as a key importer from developing countries. Besides being one of the market leaders for cut flowers, the Netherlands is also a main trade hub, especially in the area of Aalsmeer. The country's logistic position within Europe, as well as established international trade ties within the flower industry, make the Netherlands Europe's core for the flower market.
Every year roughly 1,200 to 1,500 new flowers and plants are bred and cultivated by growers. New types of cut flowers contributed massively to the flower industry. However, during the last decade, the number of flower growing companies in the Netherlands decreased. In 2010 there were roughly 1,500 growers, compared to approximately 900 in 2020. This development can also be seen among bulb growing companies. The Netherlands had to deal with a loss of approximately 200 bulb growing companies between 2010 and 2020. A decrease in the number of growing companies in the country reflected the development of competition in the form of other emerging markets. Countries like Ecuador, Colombia, Kenya, and Ethiopia are making their mark on growing flowers, and are seen as big players in the market. They are among the leading live trees, plants, and flowers suppliers to the Netherlands, Kenya being the number one import country with an import value of roughly 350 million euros in 2020.

The leading export markets for Dutch floriculture are European, with Germany, UK, and France among the top countries importing flowers from the Netherlands. The value of live trees, plants, and flowers exported from the Netherlands increased by roughly 3.4 billion euros between 2010 and 2020.

As mentioned earlier, the Netherlands is known to be a main hub for cut flowers. Royal FloraHolland, one of the largest auction companies in the world, saw the sales volume of roses amount to approximately 2.81 billion, whereas the Tulip reached a sales volume of roughly 1.75 billion in 2020.

The rise of developing countries as flower growers and the shift of wholesalers towards these countries is a challenge for the flower growing market in the Netherlands as well as the local economy. However, developments in e-commerce could result in a positive impact on the Dutch flower growing market, with the opportunity to complete direct sales with the consumer instead of using an intermediary such as a wholesaler.

In the following 4 chapters, you will quickly find the 37 most important statistics relating to "Flower market in the Netherlands". 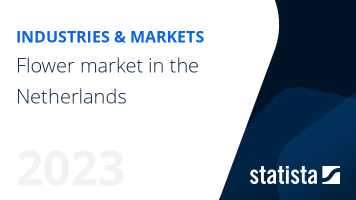 Go to report Flower market in the Netherlands
Top Seller

The most important key figures provide you with a compact summary of the topic of "Flower market in the Netherlands" and take you straight to the corresponding statistics.