Poverty in the UK - Statistics & Facts

Despite being one of the most developed countries in the world, the United Kingdom struggles with a fairly significant degree of poverty. As of 2020, around 11.7 million people in the UK were living in relative poverty, with that number increasing to almost 14.5 million when housing costs are considered. During this year, it was also estimated that almost 3.2 million children were living in relative poverty, a considerable increase when compared with 2013/14, when it was estimated that there were 2.28 children in relative poverty. Child poverty rates have fallen slighty since the mid-1990s, but not as much as the rate of pensioner poverty, which fell from 29.2 percent in 1997/98 to 13.8 perent by 2014/15.

In 2020/21, approximately 270 thousand households in England were owed a homeless duty, by their local authority in order to prevent them falling into homelessness. A further 39,570 were owed a main duty, whereby the applicant is given more urgent assistance, such as temporary accomodation. Although the number of statutory homeless households being owed a main duty fell between 2003/04 and 2009/10, this began to increase until 2017/18, when new legislation was passed aimed at preventing homelessness before households got to the stage where they needed a main duty. During a similar time period, there was also a growth in the estimated number of rough sleepers in England, increasing from 1,768 in 2010, to 4,751 in 2017. This too has receded somewhat in recent years, with year-on-year decreases in 2018 and 2019 perhaps indicative that the new approach to homeless may be working.

Another symptom of poverty in the United Kingdom is the increasing usage of food banks, which has risen dramtically in recent years. Over 2.5 million people receieved three days worth of emergency food from the Trussel Trust in 2020/21, the UK's main foodbank supplier, compared with fewer than one million in 2013/14. Households with lower incomes typically spend a higher share of their money on food and drink and are therefore more vulnerable to sudden economic shocks such as the one caused by Coronavirus (COVID-19) pandemic. Going into 2022, it looks certain that the cost of living crisis, caused by rising inflation and soaring energy prices will hit low-income UK households the hardest.
This text provides general information. Statista assumes no liability for the information given being complete or correct. Due to varying update cycles, statistics can display more up-to-date data than referenced in the text.
Published by D. Clark, Feb 11, 2022

Number of statutory homeless households on main duties in England
42,120

Number of statutory homeless households on prevention or relief duties in Q2 2022
72,210

Number of rough sleepers on single night in England
2,440

Government expenditure on benefits in the UK 2000-2022 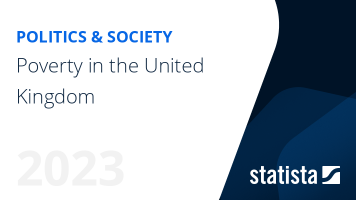 Go to report Poverty in the UK
Top Seller

The most important key figures provide you with a compact summary of the topic of "Poverty in the UK" and take you straight to the corresponding statistics.