Homelessness in the U.S. - Statistics & Facts

Published by Statista Research Department, Jun 22, 2021
Homelessness in the United States seems almost ubiquitous nowadays, particularly in West Coast states like California. It’s a problem without an easy solution, especially since the prosperity felt in the U.S. over the past few years has left some of the country’s most vulnerable behind.
Each January, the U.S. Department of Housing and Urban Development (HUD) performs a count of the nation’s homeless population, where the homeless in shelters and on the street are counted individually. As of 2020, the estimated homeless population was around 580,466 people, a decrease from 647,258 people in 2007. However, critics of this method argue that the homeless population is in fact much larger, as some homeless people may be couch-surfing, staying with friends or family, or sleeping in hotels or motels, with these individuals comprising the nation’s “invisible” homeless population. The majority of homeless people are male and white, with about 161,500 living in California.

The homeless population in the United States

The plight of homeless veterans in the U.S. often draws the attention of the media, with many saying that the Department of Veterans Affairs does not do enough to prevent veterans from becoming homeless. An estimated 90.9 percent of homeless veterans are male, and in 2020, 22,048 were living in homeless shelters. There are several reasons why a U.S. veteran could end up homeless, including lack of affordable housing, struggles with post-traumatic stress disorder (PTSD), or even substance abuse problems.


Special attention should also be paid to the number of homeless students in the U.S. during the academic year 2017-18. Rather than being counted by the Department of Housing and Urban Development, this number is calculated by the Department of Education, based on reports from teachers and schools. During the academic year of 2017-18, there were an estimated 263,058 homeless students living in California, many of whom live with their parents in hotels, motels, cars, or with family or friends, placing them firmly in the “invisible” homeless population.

Health and security of the homeless

Sadly, many homeless people suffer from severe mental illnesses, substance abuse problems, are the victims of domestic abuse, or have HIV/AIDS. Furthermore, the homeless population is particularly susceptible to hate crimes and attacks, with 22 non-lethal and 14 lethal attacks being perpetrated on homeless individuals in 2019. Nine of the non-lethal attacks in 2019 were assault with a deadly weapon, and two cases was due to police brutality.

In the following 5 chapters, you will quickly find the 32 most important statistics relating to "Homelessness in the U.S.".

The most important key figures provide you with a compact summary of the topic of "Homelessness in the U.S." and take you straight to the corresponding statistics.

Poverty and income in the United States

Poverty in the UK 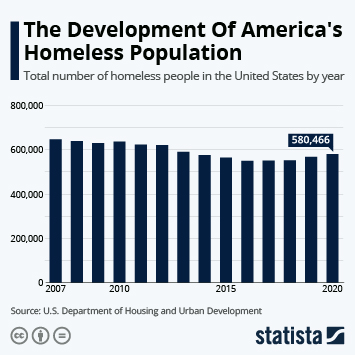 total number of homeless people in the US by year