Religion in Europe - Statistics and Facts

Published by Statista Research Department, Nov 16, 2021
On a rudimentary level, Europe is divided along three religious lines: Protestant in the north and west, Catholic in the south and Orthodox in the east. Each of these churches is further subdivided liturgically and nationally. There are state churches in countries like England, Malta, Denmark and Iceland. In other countries, the state religion has decreased in importance since the 19th century. For example, although the Netherlands were officially a Protestant country until 1848, Catholics now form the largest group of believers, with 24 percent of the Dutch identifying as Catholic in 2015. The various Protestant churches are attended by roughly 15 percent of the Dutch.
Of Finland’s 5.5 million inhabitants, 4.1 million identified themselves as Christian. Nearly 7.6 million people in Sweden were members of Sweden's main church, the New Church. In southern Europe the Catholic church is most prominent. Only 3.2 million out of approximately 60 million Italians did not belong to the Roman Catholic church, the majority of them Protestants. In a recent survey, 30 percent of the respondents said they think being Catholic is very important for being truly Italian. According to a recent survey, in Belgium too the majority of the population identified itself as Christian, although the share of church-attending Christians was just ten percent.

A growing number of Europeans do not practice any religion at all. In the Netherlands the number of people who did not identify with any religious denomination increased from 45 to 50 percent between 2010 and 2015, making the non-religious group larger than any of the Christian churches. In Finland, the number of people not belonging to any denomination increased from approximately 760,000 to 1.3 million over the last ten years. In Sweden the share of the population who were members of the church decreased in the same period from 75.6 percent to 61.2 percent. In the last ten years, between 46,000 and 86,000 people in Sweden annually cancelled their church membership. In Denmark too, membership in the national church has decreased between 2008 and 2018, from roughly 4.49 million to 4.35 million.

In Belgium, the most important reason to leave a religion was 'gradually drifting away from religion', but a large number of people also mentioned 'no longer believing in their religion's teachings'. The same survey in the Netherlands led to similar conclusions. According to a majority, the place of religion in life was just not too important, or not at all important.

Since the 1960s, with the arrival of migrant workers, inhabitants of former colonies and refugees, the number of Muslims in Europe has increased. In 2015, approximately 13,000 Muslims lived in Finland. In Italy, foreign nationals who identified as Muslim numbered roughly 1.4 million. Approximately 425,000 of these Muslims were of Moroccan nationality, and a further 215,000 came from Albania. About five percent of the population in the Netherlands practiced Islam in 2015, most of them coming from Turkish and Moroccan backgrounds.

Alternative religions are becoming increasingly popular in Europe. In Italy, over 16,000 people were following exoteric and ancient wisdom religions in 2017. In 2015, 35 individuals in Finland identified themselves as involved in indigenous religions and neo-paganism. In many other countries however, numbers are not tracked and it remains unclear how many people follow a religion different from the largest world religions.

In the following 5 chapters, you will quickly find the 20 most important statistics relating to "Religion in Europe".

Statistics on the topic
Number of clergy in the UK
54,600
Numbers of antisemitic incidents reported in the UK 2021
2,255
Government spending on religous community services in 2019/20
58m GBP

The most important key figures provide you with a compact summary of the topic of "Religion in Europe" and take you straight to the corresponding statistics. 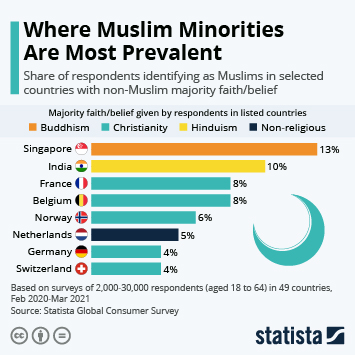