Cricket is a sport with eleven players on each side, in which the objective is for one side to score more runs than the other side. There are many forms of the game, played over as many as five days, but each form of the game follows similar rules.
One team will start out as the fielding team, putting eleven players on the field in a configuration largely of their choosing. Two players from the opposing team, known as batsmen, will stand at opposite ends of the pitch in the center of the field, while a player from the fielding team will bowl the ball towards the batsman. The batsman will then attempt to strike the ball in a manner that allows them to score runs, either by hitting the ball towards the boundary of the field, or far enough away from the fielders that the batsmen have time to run between each end of the pitch, thus scoring runs.

Batsmen are dismissed in a number of ways, including if the ball topples the top of the stumps behind them, or if the ball comes off the bat and is caught by a member of the fielding team before the ball hits the ground. When every player from the batting team has had a turn at bat, then the teams will swap roles, and the fielding team will become the batting team, and attempt to exceed the run total of the opposing team.

The number of people playing cricket in England has decreased in recent years, from approximately 428,000 in 2009 to roughly 278,600 in 2016. Of children aged between 11 and 15 years, close to 19 percent stated having played in the past month in 2016, and around half of cricket participants were members of a club. In Wales, cricket participation appears to be twice as high among males, compared to females.

Cricket appears to be the sport with the largest proportion of core fans aged above 55 years in the United Kingdom (UK), with approximately 35 percent of cricket fans falling into that age group. The most interesting cricket formats for fans are test matches, one day internationals and T20 internationals, followed by county T20, county one-day and county four day matches. When it comes to format change, roughly 43 percent of fans would be interested in a move to a 2 division Test "league" and 36 percent would be interested in a move to Test matches 4 days only.
This text provides general information. Statista assumes no liability for the information given being complete or correct. Due to varying update cycles, statistics can display more up-to-date data than referenced in the text.
Published by Statista Research Department, Jul 12, 2019

Scotland: number of participants in cricket from 2008 to 2014

Chance to Shine cricket participation in the UK in 2022, by gender

Share of cricket players that are club members in England
50.6%

Children participating in cricket in England 2018-2021

Chance to Shine cricket participation in the UK 2022 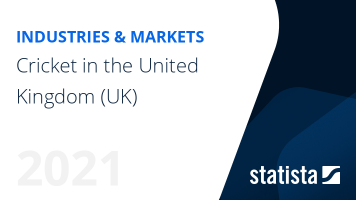 The most important key figures provide you with a compact summary of the topic of "Cricket in the United Kingdom (UK)" and take you straight to the corresponding statistics.

England and Wales Cricket Board (ECB)