Published by Statista Research Department, Mar 17, 2021
The number of people playing rugby league has reduced in recent years with approximately 58,800 people on England playing at least twice a month in 2020. The participation in rugby union has decreased slightly from roughly 260 thousand in 2016 to 195 thousand in 2020, playing at least twice a month. Participation of children experienced minor fluctuations in the past decade with 5.5 percent of kids between the age of 5 and 10 playing at least once a month outside of school and 14.6 percent of 11 to 15 year olds playing at least on a monthly basis, either in or outside of school. Rugby union is governed by the Rugby Football Union (RFU) in England, by the Irish Rugby Football Union (IRFU) in Ireland as well as Northern Ireland, by the Scottish Rugby Union (SRU) in Scotland and by the Welsh Rugby Union (WRU) in Wales.
In 2019 the most common injuries recorded by the RFU are concussions by far, which is not surprising considering the violent nature of the game. The number of recorded injuries during matches by the RFU in England came to about 823 during the 2018/19 season.

In the following 7 chapters, you will quickly find the 50 most important statistics relating to "Rugby in the United Kingdom (UK)".

Statistics on the topic
Number of adults in England participating in rugby league at least twice per month
45600
Total number of recorded rugby players in Ireland and Northern Ireland
194,427
Percentage of male secondary school students in Wales who played in any setting in 2018
54.5%

The most important key figures provide you with a compact summary of the topic of "Rugby in the United Kingdom (UK)" and take you straight to the corresponding statistics. 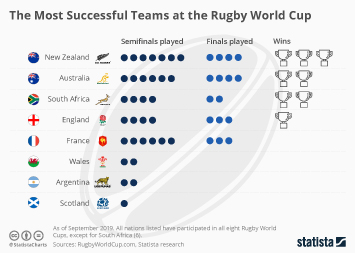 The Most Successful Teams at the Rugby World Cup 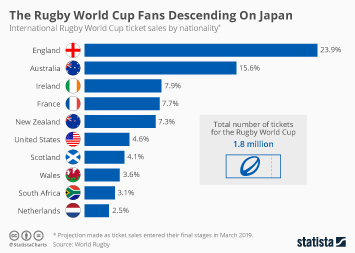 The Rugby Fans Descending On Japan