Condiments and seasoning market in Europe - Statistics and Facts

The vast majority of European oils, margarines and sauces produced in 2016 came from Italy. That year, Italy counted nearly 4,300 companies producing such products, more than twice as much as Europe’s second-largest producer Spain (1,681 companies) and almost ten times as much as number three, Portugal (448 companies). Furthermore, next to all its companies producing oils, margarine and sauces, Italy was also home to approximately 300 companies specializing in manufacturing condiments and seasoning. In comparison, in the United Kingdom there were 185 enterprises producing condiments and seasoning.
In 2016/2017, Italy’s manufacturers produced a total of just over 182,000 tons of olive oil. Moreover, Italy’s industry also manufactured 95 million liters of Italian PDO and PGI balsamic vinegar. The majority of the vinegar produced was Aceto Balsamico di Modena PGI, but Italy also made Aceto Balsamico Tradizionale di Modena PDO and Aceto Balsamico Tradizionale di Reggio Emilia PDO vinegar.

Spain’s olive oil production amounted to over one million tons in 2017, a decrease from the roughly 1.3 million tons it produced in 2016. Leading olive oil producers in Spain were Sovena España, S.A. (roughly 101 million liters in 2016), Grupo Ybarra-Migasa (74 million liters) and Deoleo, S.A. (48 million liters). In 2015, Spain’s leading oil producer, however, only ranked 8th in the list of leading Spanish companies in the oil and margarine industry. The list was topped by Bunge Ibérica, S.A., with a sales value of 2.5 billion euros in 2015, compared to Sovena España, S.A.’s 550 million – although it should be added that Bunge Ibérica also produces other food items. The leading company in the spice, seasoning and condiments industry that year was Aceites Borges Pont, S.A., with a sales value of 340 million euros, followed by Grupo Ybarra Alimentación, S.L., with 180 million euros.

Households in Sweden spent a total of 5.7 billion Swedish krona on edible oils and fats in 2015. The total sales turnover of sauces and seasonings in 2016 came up to over 6.2 billion Swedish krona. In the United Kingdom, the sales from the manufacture of condiments and seasoning reached nearly 1.8 billion British pounds that year, whereas in Germany food retailers generated roughly 317 million euros from relish and condiment sales. In 2016, a Danish household spent roughly 112 Danish kroner on olive oil per year.
This text provides general information. Statista assumes no liability for the information given being complete or correct. Due to varying update cycles, statistics can display more up-to-date data than referenced in the text.
Published by Statista Research Department, Nov 28, 2022

Number of enterprises for manufacturing condiments and seasonings with a turnover less than £49,999 in the UK
100

Condiments and seasonings: enterprises in the UK 2022, by turnover size band 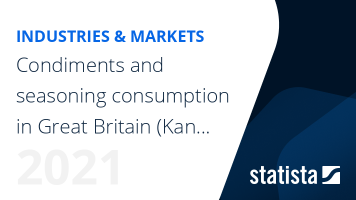 The most important key figures provide you with a compact summary of the topic of "Condiments and seasoning market in Europe" and take you straight to the corresponding statistics.