Published by Statista Research Department, Nov 22, 2022
No other country grows and consumes as many spices as India. With a wide range of climates and topography, the Indian subcontinent has been in the limelight for its spices, fabrics, and luxury goods, which established international trade with many countries with beginnings from the East India Company in the 1,700s. India is one of the largest producers of spices with about 75 varieties out of the 109 listed by the International Organization for Standardization. In terms of production volume, Madhya Pradesh leads the country.
One of the essentials of an Indian kitchen is the “masala dabba”- a traditional spice box. It typically consists of small cups (usually five or seven) containing spices that are used in daily cooking. Whether it’s a soupy south Indian Rasam, a snack time Gujarati Dhokla, a sumptuous dessert in the Bengali Mishti Doi, or the traditional tea in the Kashmiri Kahwa. Spices are generally expensive when compared to other agricultural products. Saffron remains the most expensive spice. After Iran, India is the world’s leading producer of coveted spice.

Export and import of spices

Indian spices are highly sought-after globally. Contrary to a decline in the country’s overall merchandise exports, spice exports showed a significant increase during the same year. The United States was the leading importer of Indian spices at a value of about 44 billion Indian rupees. Even as one of the leading exporters of spices, India imports certain spices, such as Asefotieda or hing. Hing, an essential ingredient in traditional cuisines, was imported from neighboring countries such as Afghanistan, Iran, and Uzbekistan. Recently, India started the cultivation of this spice variety, and if successful, this spice will be another feather in the cap for the country.

The spices are valued not only as a flavoring agent but also for their medicinal properties. Traditionally, spices such as turmeric, pepper, cinnamon, and ginger, to name a few, have been used in ayurvedic medicines along with various medicinal herbs and roots. Unsurprisingly, the coronavirus (COVID-19) pandemic's onset has boosted the use of traditional remedies and increased dietary supplement intake to boost immunity. To promote the cultivation of high-value spices, intercropping with coconut groves was proposed in a few states to help to meet the growing demand of domestic and international markets.

In the following 4 chapters, you will quickly find the 20 most important statistics relating to "Spice market in India". 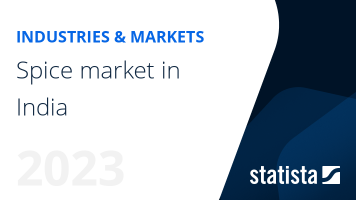 The most important key figures provide you with a compact summary of the topic of "Spice market in India" and take you straight to the corresponding statistics.

Local foods in the U.S.