Published by
John Elflein,
Jan 18, 2022
Chronic kidney disease (CKD) is diagnosed when one’s kidneys fail to work properly for longer than three months. In comparison, acute kidney injury or acute renal failure occurs when the kidneys suddenly stop working. CKD progresses slowly, and symptoms may not appear until the kidneys are badly damaged. As the kidneys stop working properly, waste builds up in the blood resulting in increased symptoms and eventual kidney failure. In the United States, CKD is slightly more common among females than among males, with 16.4 percent of females diagnosed with CKD in the period from 2015 to 2018, compared to 13.3 percent of males. CKD also occurs more frequently among older individuals, with most cases found in those aged 65 years and older.

What is end-stage renal disease?

When CKD has reached an advanced stage in which the kidneys are no longer able to work it is called end-stage renal disease (ESRD). Symptoms at this time become more pronounced and can include a loss of appetite, nausea, vomiting, problems sleeping, changes in urination quantity, fatigue, and itching. At this late stage of the disease dialysis or a kidney transplant are required to survive, however many people live long lives with such treatment. In 2018, there were almost 786 thousand prevalent cases of ESRD in the United States. Kidney disease remains one of the leading causes of death in the United States, with death rates among older adults with CKD significantly higher than among older adults without the disease.

The most common causes of kidney disease are diabetes and high blood pressure. In the period from 2015 to 2018, it was estimated that almost 37 percent of those in the U.S. with CKD also had diabetes, while 32 percent had hypertension and 18 percent were obese. Cardiovascular conditions are also more common among those with CKD, with around 66 percent of older adults with CKD reporting some cardiovascular disease, compared to 38 percent of adults without CKD. As there is no cure for kidney disease, kidney transplants remain one of the most common types of organ transplantations in the United States, second only to liver transplants.

In the following 6 chapters, you will quickly find the 32 most important statistics relating to "Kidney disease in the U.S.".

Statistics on the topic
Country with the highest rate of treated end-stage renal disease
Taiwan
Tenth leading cause of death worldwide
Kidney diseases
Number of kidney transplants in the Americas in 2020
32,957

The most important key figures provide you with a compact summary of the topic of "Kidney disease in the U.S." and take you straight to the corresponding statistics.

Cardiovascular disease in the U.S.

Alzheimer's disease and other dementias

Lyme disease in the U.S. 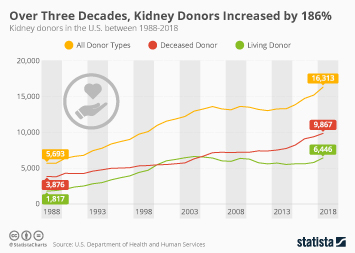 kidney donors in the united states