The Kroger Company, founded in 1883 in Cincinnati, Ohio by Bernard Kroger is the largest grocery chain in America. It currently operates a variety of different retail establishments, from supermarkets to convenience stores, in 34 U.S. states. Its different chains include Fred Meyer, Ralphs, Food 4 Less, and Kwik Shop, just to name a few. Kroger boasts over 2,900 locations in the United States but has yet to expand overseas. Despite this, Kroger is the second-largest hypermarket chain worldwide.

In recent years, Kroger has displayed healthy growth with over 130 billion dollars in total sales in 2020, up by eight percent from the previous year. According to forecasts, Kroger is projected to remain a market leader in 2026, based on its sales generated through the supermarket and neighborhood store channels in the United States. Some of Kroger's main competitors are Albertsons and Publix.

The supermarket and hypermarket retail industry in the United States is a diverse landscape with many globally recognized players. Based on estimated sales in 2021, Walmart was the leading hyper-store and supermarket retailer by a large margin, followed by Kroger. The Kroger brand is the company's core retail business generating the highest sales, but the Group does operate a number of other retail banners, including Fred Meyer, Fry's Food & Drug, and Smith's. In addition to its brick-and-mortar business, Kroger also operates an e-commerce business, but in 2020 only around six percent of the company's sales was attributed to online channels.
This text provides general information. Statista assumes no liability for the information given being complete or correct. Due to varying update cycles, statistics can display more up-to-date data than referenced in the text.

Share of Kroger's sales attributed to the United States
100%

U.S. percentage of worldwide retail sales of top retailers in the U.S. 2021

United States: number of stores of the leading retailers 2021

Leading supermarkets in the U.S. 2021, based on retail sales

United States: number of stores of the leading retailers 2021 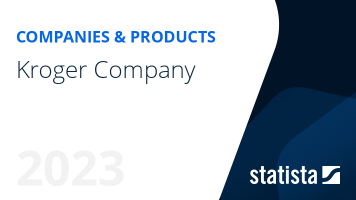 The most important key figures provide you with a compact summary of the topic of "Kroger Company" and take you straight to the corresponding statistics.