Costco Wholesale Corporation is a company that operates a chain of big-box retail stores which resemble warehouses and sells a wide variety of wholesale products. Unlike most big-box stores, Costco requires an annual membership to shop in their stores. Some of the different departments in which the company operates include grocery, appliances, baked goods, electronics, apparel, and books, among many others, as well as offering a food court in many of its establishments. Many branches also offer optical services, gas stations, tire garages, or photo processing services. Costco opened its first warehouse in Seattle, Washington, in 1983 and has since expanded to become the third largest retailer in the world.

In 2021, the company generated global net sales of around 192 billion U.S. dollars, with the U.S. being its most profitable regional segment. Costco’s main competitor, Walmart, still dwarfs Costco in terms of sheer numbers. In 2021, Walmart generated almost three times as much retail sales as Costco. Other competitors, though not as large as Costco, are Target and BJ’s Wholesale Club. The former had net sales amounting to approximately 104.6 billion U.S. dollar, while the latter which, like Costco, also functions as a membership-only warehouse club, recorded net sales of around 16.3 billion U.S. dollars.

Through its over 800 warehouses, spread over 13 countries worldwide, Costco provided employment to nearly 300,000 people. Most of the stores were located in the United States, with California leading the ranking of states with the highest number. Despite having fewer stores compared to its main competitor, Walmart, Costco had the highest average sales volume per store among the top three mass retailers in the United States. In 2021, the company boasted nearly 112 million club members worldwide. In the United States, membership fees begin at around 60 U.S. dollars per year and give members access to all Costco locations worldwide. As for Sam’s Club, membership fees start at 50 U.S. dollars annually, with the option to upgrade. Sam’s Club plus membership starts at 110 U.S. dollars per year, and unlike the club membership, customers can earn cash-back rewards. A similar concept is also applied to BJ’s Wholesale Club. In addition to the regular subscription, BJ’s Wholesale Club also operates a premium membership. This premium subscription is twice the price of the regular membership and, like its counterpart Sam’s Club, offers the opportunity to obtain cash-back rewards.
This text provides general information. Statista assumes no liability for the information given being complete or correct. Due to varying update cycles, statistics can display more up-to-date data than referenced in the text.

T. Ozbun
Research expert covering food retail and all food topics for Italy and Brazil
Get in touch with us now
Published by T. Ozbun, Oct 19, 2022 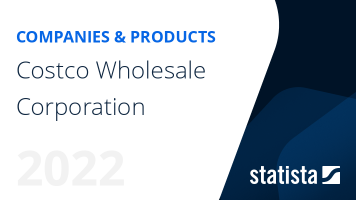 The most important key figures provide you with a compact summary of the topic of "Costco" and take you straight to the corresponding statistics.