There is much debate about whether or not supermarkets are good for the economy, especially within rural areas. The high volume throughput of these conglomerates, which allows them to sell retail at lower prices than traditional corner stores, has caused many small businesses to close and in turn causes dramatic implications on local infrastructure. Nonetheless, supermarkets in the United States play a very significant role within the economy.

In the following 4 chapters, you will quickly find the 35 most important statistics relating to "Supermarkets in the U.S.".

The most important key figures provide you with a compact summary of the topic of "Supermarkets in the U.S." and take you straight to the corresponding statistics.

Dollar Stores in the U.S. 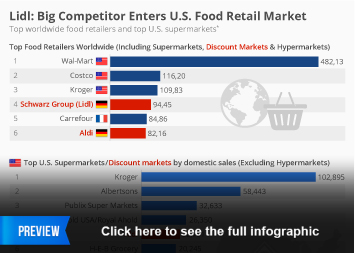