Published by Statista Research Department, Apr 1, 2021
Founded in Minneapolis, Minnesota in 1902, the Target Corporation is one of the largest discount retailers in the United States and third largest in the world (based on sales). The Target Corporation operates a chain of general merchandise stores, which offer a wide variety of general merchandise and food to their customers. The company has operated primarily in the United States since its inception. Target did have a number of stores in operation in the Canadian market, but these were all closed in 2015. As of February 2, 2019, Target operated 1,844 stores in the United States.
The company started out as the Dayton Dry Goods Company in 1902, later changing its name to the Dayton Company, but more commonly known as Dayton’s. The company was run under the Dayton-Hudson Corporation banner up until the year 2000, when it was renamed Target Corporation. Today, Target is one of the most valuable retail brands in the world. Walmart and Costco are two of the companies larger competitors in the U.S. market.

The Target Corporation sells a wide range of goods, such as food, apparel, household essentials, and seasonal offerings, as well as many others. The company also sells products online, through target.com. Target’s sales share is quite evenly distributed, with no one product segment outperforming the others by any great margin.

In the following 5 chapters, you will quickly find the {amountStatistics} most important statistics relating to "Target".

The most important key figures provide you with a compact summary of the topic of "Target" and take you straight to the corresponding statistics.

Supermarkets in the U.S. 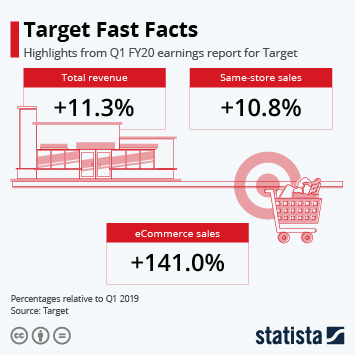