Published by
Christina Gough,
Mar 23, 2022
The MLB franchise the New York Mets was established in 1962 in New York City. Between 2002 and 2020, Fred Wilpon was the majority owner of the franchise and also served as the president of the team between 1980 and 2002. In September 2020, Steve Cohen, a hedge fund billionaire, finalized a deal to become the majority owner of the Mets, thereby making him the wealthiest owner in the MLB.
The New York Mets are currently the sixth most valuable franchise in the league with a franchise value amounting to 2.45 billion U.S. dollars in 2021. In 2020, the Mets generated 107 million U.S. dollars in revenue and the team’s operating income for that season was estimated at a deficit of 125 million U.S. dollars, a harsh decline as a result of the COVD-19 pandemic.

Over two million fans attend games of the New York Mets each season at Citi Field, which has been the home for the team since 2009. The average regular season attendance for the 2019 season stood at over 30 thousand spectators, before falling to around 20 thousand in 2021 as a result of the pandemic. The average ticket price for Mets games has remained relatively steady over the past few years, with fans having to hand over an average of 27.60 U.S. dollars to see their team during the 2019 season. The team’s Twitter and Facebook accounts have over 2.5 million fans combined.

In the following 4 chapters, you will quickly find the 40 most important statistics relating to "New York Mets". 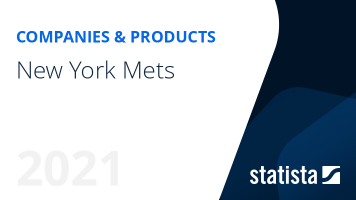 The most important key figures provide you with a compact summary of the topic of "New York Mets" and take you straight to the corresponding statistics.