Published by
Christina Gough,
Jul 11, 2021
The MLB franchise the Texas Rangers played their first game in 1961 in Washington, D.C. as the Washington Senators. After moving to Arlington, Texas, in 1972, the team was renamed the Texas Rangers. Ray Davis and Bob Simpson have co-owned and co-chaired the team since 2010 as part of Rangers Baseball Express, LLC.
The franchise value of the Texas Rangers has more than doubled in the past seven years, reaching 1.79 billion U.S. dollars in 2021, which corresponds to approximately the average franchise value of all teams across the league. The team's revenue has grown consistently over time, however dropping to 111 million U.S. dollars in 2020, with the franchise's operating income for that season amounting to a deficit of 60 million U.S. dollars, a harsh decline as will all other professional sports clubs due to the COVD-19 pandemic.

Over two million people attend games of the Texas Rangers each season at Globe Life Park in Arlington, which has been the home for the team since 1994. For the last two season, the average regular season attendance has been at around 26 thousand fans, a drop from the 31 thousand fans who passed through the gates during the 2017 season. The average ticket price for Texas Rangers' games has remained steady over the past few years, with fans having to hand over an average of 25.75 U.S. dollars to see a home game during the 2019 season. The team’s Twitter and Facebook accounts have over 1.4 million followers and 2.3 million fans respectively.

In the following 4 chapters, you will quickly find the 39 most important statistics relating to "Texas Rangers". 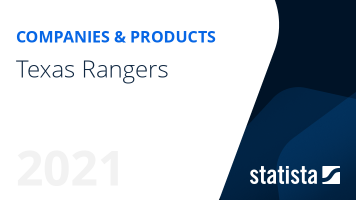 The most important key figures provide you with a compact summary of the topic of "Texas Rangers" and take you straight to the corresponding statistics.