Published by H. Plecher, Feb 8, 2019
Sharing borders with Iraq and Saudi Arabia, Kuwait is a country in Western Asia, located at the tip of the Persian Gulf. Of its population, which amounts to approximately 4.5 million inhabitants, about 0.9 million are expatriates from other Arab countries. Access to medical care and improved sanitation are significant factors contributing to a fairly high standard of living; Kuwait reports a high life expectancy and keeps its death rate at a low level. In fact, Kuwait reports the 5th lowest death rate worldwide. The country's population is quite young on average, with roughly one-fifth of the population under the age of 14.
The State of Kuwait became a sovereign nation in June 1961, when it gained independence from Britain. Since the 18th century, it has been ruled by the Al-Sabah dynasty, which is still the ruling power in Kuwait. Kuwait is a constitutional monarchy, with the Emir acting as head of state. The capital is Kuwait City, which is also the most populous city. Almost all Kuwaitis are scattered throughout urban areas, and with the Arabian Desert covering most of its land mass, the country has one of the highest urbanization rates in the world. The educational system in Kuwait developed into a fully advanced and complex system, providing equal opportunities for all, regardless of their social status. Given its success, the country today has one of the highest literacy rates.

Kuwait is also a wealthy country with a successful economy. A significant number of billionaires per capita live there, and Kuwait’s rich economy is mainly boosted by the petroleum industry. Rapid expansion of the oil industry after World War II has guaranteed the country’s economic development. Today, its GDP amounts to roughly 120 billion U.S. dollars, and has been quick to recover from the 2014 crash of the oil prices. As a result, the GDP growth rate fell the following year, and has yet to return to its former heights. Economic growth is still quite slow, and because of this and stagnation of oil prices, Kuwait's inflation will remain between 2 to 3 percent, but is estimated to spike at 3.7 percent in 2019 after the expected introduction of VAT by the government in the same year.

Unsurprisingly, the industry sector, largely driven by petroleum processing, accounts for just over half of Kuwait’s GDP generation, and it employs 40 percent of the workforce. With an oil production of roughly 3.2 million barrels per day, Kuwait has a share of 3.4 percent in the world’s total oil production. The country owns almost 6 percent of the global oil reserves, almost as much as Russia, and exports a 4.3 percent share of the crude oil exported worldwide. Despite the most recent oil prices collapse, Kuwait managed to maintain a trade surplus, although it has decreased significantly after 2014. The majority of exports go to Asian countries, such as South Korea or China.

In the following 4 chapters, you will quickly find the 35 most important statistics relating to "Kuwait".

Kuwait and the coronavirus

The most important key figures provide you with a compact summary of the topic of "Kuwait" and take you straight to the corresponding statistics. 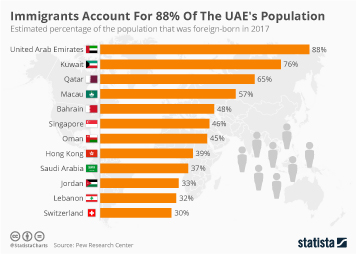 estimated percentage of the population that was foreign-born