Around 3.5 million people attend games of the St. Louis Cardinals each season at the new Busch Stadium in St. Louis, Missouri, which has been the home to the team since 2006. The average regular season attendance was above 42 thousand over the past few years. The average ticket price for games of the Cardinals has gradually increased each year and reached 35.54 U.S. dollars in the 2019 season. With over 2.4 million fans on Facebook and 1.2 million followers on Twitter, the team enjoys considerable popularity on social media.
This text provides general information. Statista assumes no liability for the information given being complete or correct. Due to varying update cycles, statistics can display more up-to-date data than referenced in the text. 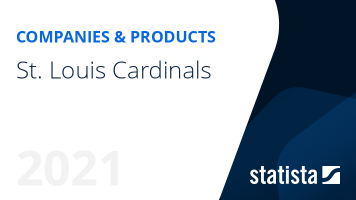 The most important key figures provide you with a compact summary of the topic of "St. Louis Cardinals" and take you straight to the corresponding statistics.