Published by Statista Research Department, Nov 8, 2022
Mostly responsible for organizing funerals, burials, and cremations, companies active in the death care industry in the United States also provide other death-related goods and services. Administering loss in cemeteries, and selling headstones and memorials could also be included in their wide range of goods and services. Despite the gloomy aura that surrounds its services, the death care industry is relatively dynamic and offers salaries that could be deemed attractive. In 2021, almost 25,000 morticians and 32,500 funeral attendants were employed by this industry in the United States, and earned median annual wages in the regions of 56,000 U.S. dollars and 32,000 U.S. dollars respectively.

The market size of funeral homes of around 18 billion U.S. dollars in 2022 is distributed among a myriad of family-owned businesses and a few large-sized actors. 89 percent of the distribution of funeral homes was in the hands of small, private companies, whereas the remaining 11 percent was divided amongst large corporations. Morbidly, following the large death toll of the COVID-19 pandemic in the United States, several leaders in the death care services market recorded record revenues in 2021. Both Carriage Services and Service Corporation International saw significant increases in their annual turnover in the same year.

Another factor that has likely contributed to this increase in revenue is the rising cost of funerals in the United States. The median cost of an adult funeral with a viewing and a burial, and including a vault, has increased from 8,508 U.S. dollars in 2014 to 9,420 U.S. dollars in 2021. For funerals with a viewing and a cremation, the median cost has increased from 4,798 U.S. dollars to 6,970 U.S. dollars in the same time period. Moreover, the price factor may have contributed to the growing preference for cremations over burials. As a result, the cremation rate in the United States increased exponentially between 2000 and 2021, while at the same time the burial rate has been significantly declining since 2005.

In the following 4 chapters, you will quickly find the 24 most important statistics relating to "Death care services in the U.S.". 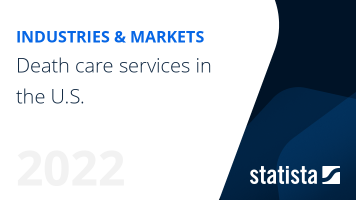 The most important key figures provide you with a compact summary of the topic of "Death care services in the U.S." and take you straight to the corresponding statistics.

Death in the U.S.