With a long history of textile manufacturing dating back to the Ottoman Empire, Turkey remains an important country in the global textile and apparel industry. In 2020, the country ranked as the fourth largest exporter of textiles worldwide, accounting for almost 3.3 percent of all exports. The industry is also still showing signs of growth, with the value of both textiles and clothing exported having more than doubled since 2000. A large proportion of the textile and apparel goods leaving Turkey arrive in locations inside Europe, with Germany, the United Kingdom, Spain ranking as the top five destinations. In 2020, these three countries together accounted for over 8.5 billion dollars’ worth of exports.

For Turkey’s top players, textile and apparel production is clearly a profitable business. Among those most successful are Gülsan Sentetik Dokuma Sanayi, Kipas Mensucat Isletmeleri, and Sanko Tekstil Isletmeleri, responsible for textile manufacturing. These companies made a respective 4.9 billion, 4.6 billion and 4.3 million Turkish lira in production-based sales in 2021. The leading apparel manufacturers in the country, meanwhile, are Almaxtex Tekstil and Şık Makas Giyim Sanayi, generating approximately 2.4 billion and 1.8 Turkish lira, respectively, in that same year.

As well as the successful manufacturing and trade industries, Turkey’s retail market for textiles and clothing is also strong. Since 2002, consumer spending on such items has increased considerably, with households spending a total of approximately 4.68 million Turkish lira per month on clothing and 605.3 million lira per month on household textiles in 2019. Given that there are over 29.5 thousand stores specializing in selling textiles in the country and 56 thousand stores selling clothing, the retail sector is also a key area for employment. In 2020, these stores employed 53 thousand and 251 thousand people, respectively.
This text provides general information. Statista assumes no liability for the information given being complete or correct. Due to varying update cycles, statistics can display more up-to-date data than referenced in the text.
Published by Zeynep Dierks, Nov 7, 2022

Value of the leading global textile exporters in 2020, by country

Share in world exports of the leading textile exporters 2020, by country 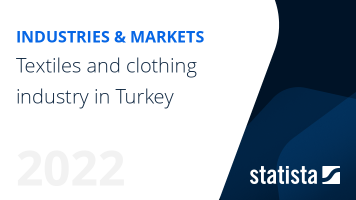 The most important key figures provide you with a compact summary of the topic of "Textiles and clothing industry in Turkey" and take you straight to the corresponding statistics.