Published by N. Sönnichsen, Nov 19, 2020
With the British government bearing down on its 2050 net zero emissions target, the role of the fossil fuel industry in the United Kingdom has been shifting. Low oil prices throughout 2020 are impacting offshore oil production in the North Sea, fracking operations are underlying a moratorium, and coal’s contribution to the country’s power mix has been reduced to the bare minimum. As the coronavirus pandemic held the economy in its grip and electricity demand began changing, coal plants were the first to be shut off. Since 1970, fossil fuel dependence in the UK has fallen by nearly 20 percent. Nevertheless, the UK is still one of the countries with the highest oil consumption worldwide.

Indigenous fossil fuel production in the UK increased for the second consecutive year in 2019. This was largely due to greater oil production output, which amounted to some 1.12 million barrels per day. However, a March 2020 forecast suggests the UK oil industry has its golden days behind it. Oil production is projected to be halved between 2020 and 2035.
Anglo-Dutch oil supermajor Royal Dutch Shell is the most valuable oil & gas company listed on the London Stock Exchange. In April 2020 when oil prices crashed to historic lows, Shell announced one of the most aggressive net zero targets of any Big Oil company. By 2050 it plans to completely offset emissions related to its own production and energy use. In order to reduce the carbon footprint of products such as gasoline and jet fuel which it sells to customers, Shell also proclaimed it would shift its client base to those businesses and sectors with 2050 net zero targets of their own.

Death of an industry

With the government looking to turn off the last coal power plants by 2025, coal mining in the UK has been notably reduced. While over 130 million tons of coal were extracted just through deep mining in the 1970s, in 2019, this figure stood at less than 100,000 tons. Surface mining produced a further 2.07 million tons of coal that year. In order to compensate for lower domestic production, coal imports rose significantly between 2000 and 2014, before declining to an annual average of eight million tons from 2015 onwards.

In the following 4 chapters, you will quickly find the 27 most important statistics relating to "Fossil fuel industry in the UK".

The most important key figures provide you with a compact summary of the topic of "Fossil fuel industry in the UK" and take you straight to the corresponding statistics. 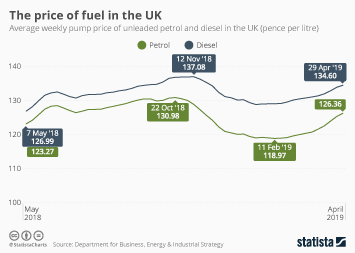 The price of fuel in the UK