Timor-Leste is the eastern part of Timor Island in the Indonesian Archipelago. A former Portuguese colony, it achieved independence in 2002 after an extended war with neighboring Indonesia. A recent economic collapse has led to a contraction in real gross domestic product (GDP). As a result of this political and economic instability in the past decades, the population is beset with developmental hurdles.
The economy of Timor-Leste is tied closely to the oil price, the fall of which led to the recent recession. This has caused a sharp drop in the fiscal balance in relation to GDP, indicating that the government has been struggling to bolster the economy using classic Keynesian stimulus. The unemployment rate has remained low through the crisis. While this could indicate that the government stimulus is effective, it more likely indicates that most of the workforce is engaged in subsistence agriculture and thus less exposed to the business cycle. The low rate of urbanization would point to the latter.

In addition to being predominantly rural, the Timorese people face a variety of obstacles: Famine persists, and roughly one in 4 Timorese are undernourished. Preventable diseases remain an issue. Deaths from tuberculosis have increased in recent years, though deaths from malaria are approaching zero. The infant mortality rate, a good indicator for the overall efficacy of the healthcare system, is also decreasing, though it is still high.

Some aspects indicating life quality seem to be increasing, in spite of the recent setback in nominal GDP per capita. Annual mobile subscription growth seems to indicate market saturation, suggesting that personal connectivity is increasing. Indeed, the majority of internet traffic in Timor-Leste originates from mobile phones. Per capita alcohol consumption has also increased in recent years, diverging from the low rates in Indonesia - which reports a Muslim majority population -, though the link between drinking and life satisfaction is not agreed upon.
This text provides general information. Statista assumes no liability for the information given being complete or correct. Due to varying update cycles, statistics can display more up-to-date data than referenced in the text.

Share of economic sectors in the GDP in Timor-Leste 2020

Timor-Leste and the coronavirus 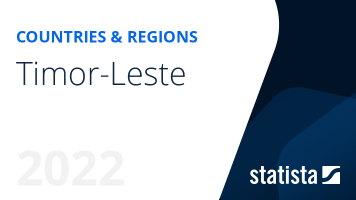 The most important key figures provide you with a compact summary of the topic of "Timor-Leste" and take you straight to the corresponding statistics.