Pistachio market worldwide and in the U.S. - statistics & facts

Pistachios are one of the most versatile and distinctive varieties of nuts; with a unique flavor and color that goes well with cakes, pastries, ice cream, and a variety of savory dishes. In 2020/2021 the global production of pistachios amounted to over one million metric tons. Although pistachios originate from Central Asia, the United States produced about half of the world’s pistachios, more than any other country. However, the country with the largest harvested area of pistachios worldwide in 2020 was Turkey, with over 380 thousand hectares of pistachio trees, compared to just over 150 thousand hectares harvested in the United States. The gross production value of pistachios worldwide amounted to about nine billion U.S. dollars in 2020/2021.

Consumption of pistachios in 2020/2021 amounted to about 865 thousand metric tons, which came to about 0.09 kilograms per person worldwide. Americans consume many more pistachios than the global average, at around 0.6 pounds on average in 2021/21, up from 0.48 pounds in the previous year.
This text provides general information. Statista assumes no liability for the information given being complete or correct. Due to varying update cycles, statistics can display more up-to-date data than referenced in the text. 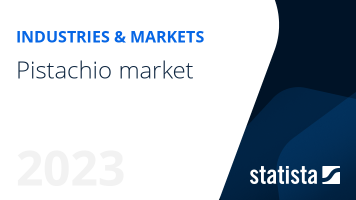 Go to report Pistachio market worldwide and in the U.S.
Top Seller

The most important key figures provide you with a compact summary of the topic of "Pistachio market " and take you straight to the corresponding statistics.