The most preferred product going by sales share, is Korean red ginseng but the most commonly taken products across all age groups were vitamins. South Koreans prefer to purchase health functional products via online shopping malls especially open markets and social commerce sites, such as 11st, Gmarket, and Coupang. Recently, the number of people who purchase the products directly from overseas has also increased because of cheaper prices and reliability.

In the following 4 chapters, you will quickly find the 23 most important statistics relating to "Health functional food in South Korea ". 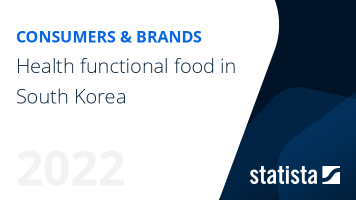 The most important key figures provide you with a compact summary of the topic of "Health functional food in South Korea " and take you straight to the corresponding statistics.