Published by Statista Research Department, Mar 2, 2022
Before the outbreak of COVID-19, South Korea was recording a new peak in the number of visitors to the country. Prior to the pandemic, the country’s tourism industry was constantly growing and highly benefitting from Hallyu. The term translates to a Korean Wave and describes the popularity of South Korean cultural products outside of its borders.

Who travels to South Korea?

Most of the tourists travelling to South Korea were in their twenties. A significant part of tourists were from China, although the number of Chinese tourists had plummeted in 2017 due to bilateral political tensions. In 2019, South Korea’s tourism industry took another hit after political tensions with Japan. While the industry was growing nonetheless, the global outbreak of COVID-19 in 2020 delivered a devastating hit on the overall tourism industry.

How did the South Korean tourism industry respond to COVID-19?

Amidst the difficult framework of the pandemic, the Korean Tourism Organization began to switch their strategy towards online marketing. In cooperation with Netflix, they launched an advertising campaign that highlighted South Korean content on the streaming platform, offering users the opportunity to explore South Korea via streaming content. This pre-emptive campaign builds upon an important aspect of the South Korean tourism industry: Hallyu tourism. The organization found that a portion of incoming tourists from all over the world were travelling to South Korea to experience Hallyu at its origin. Additionally, the prevalence of Hallyu helped to improve the country’s image, attracting even more tourists to choose South Korea as their next tourist destination.

How much money do tourists spend in South Korea?

Another leading reason to travel to South Korea was for shopping. In 2019, the average tourist spent around 600 U.S. dollars on shopping per trip. Before the pandemic, the average expenditure per capita was at around 1.19 thousand U.S. dollars, adding up to total tourist receipts in excess of 20.7 billion U.S. dollars in 2019. Average expenditure has shot up due to quarantine costs upon arrival, while tourist receipts have plummeted as traveling has contracted during the pandemic. Visitors to South Korea spent varying amounts of money per day during their stay, with French tourists leading the pack by some margin.

In the following 5 chapters, you will quickly find the 27 most important statistics relating to "Tourism industry in South Korea ". 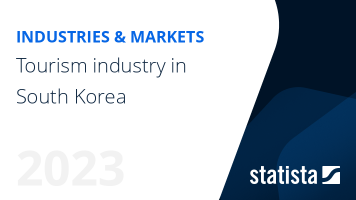 The most important key figures provide you with a compact summary of the topic of "Tourism industry in South Korea " and take you straight to the corresponding statistics. 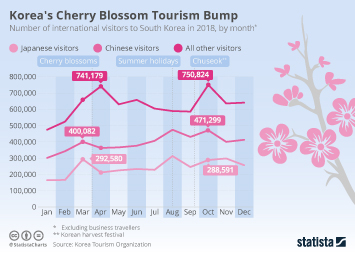