Published by Amy Watson, Sep 4, 2019
Across the globe, particularly in Western countries, the media industry has begun to pay more and more attention to minority groups. News companies now cover everything from the Black Lives Matter movement to same-sex marriage, and social networks are increasingly used to raise awareness of key issues and debate pertinent topics.
LGBTQ issues in particular are more in the public eye than ever before, and whilst many argue that there is still progress to be made, a shift in attitudes towards the LGBTQ community is clear. A 2018 study showed that the vast majority of surveyed adults believed that gay and lesbian relationships are morally acceptable, marking a significant change in attitudes over the past decade. Back in 2008, respondents were evenly split on whether they believed same-sex relations were right or wrong.

There is also a growing expectation for change and a desire to challenge stereotypes and normative attitudes concerning LGBTQ representation. In 2019, a survey revealed that just 27 percent of U.S. adults felt that there was enough representation of LGBTQ people in movie and TV roles. Indeed, the number of LGBTQ characters in TV series by streaming services such as Netflix in the United States still leaves a lot to be desired. That said, Netflix is more inclusive than most in this respect, with more than 14 times the amount of LGBTQ characters in its shows than Amazon Prime.

Whilst TV and movies have not traditionally been embraced the LGBTQ community, particularly ethnic minority groups within that community, projects such as the Frameline LGBTQ Film Festival in the U.S. aim to change that. The Frameline Film Festival (originally known as the San Francisco International LGBT Film Festival) was the first event of its kind dedicated to LGBTQ cinema in the United States, and its 42nd edition in 2018 showcased 153 films originating from 39 different countries.

When it comes to LGBTQ consumers, data shows that there has been an increase in users visiting dedicated LGBT websites and blogs, which is good news for the many content creators and bloggers out there carving out their own niche on the internet. In fact, a survey held in the summer of 2018 revealed that 58 percent of surveyed LGBTQ women in the United States and 67 percent of LGBTQ men said that they had accessed an LGBTQ site or blog in the past 30 days. There is now a wealth of LGBTQ content available on the internet for consumers to enjoy, from popular online magazine Queerty to successful gay travel blogs such as Nomadic Boys, The Gay Globetrotter and The Rainbow Route.

Finally, it would be remiss to discuss LGBTQ media in the U.S. without mentioning hit show and social media sensation ‘RuPaul’s Drag Race’. The show has won the hearts of viewers and followers all over the world, and has thrust a group previously given little airtime into the media spotlight. Multiple celebrities have made guest appearances on the show, including singer-songwriter Lady Gaga, burlesque dancer Dita von Teese and ‘Boys Don’t Cry’ star Chloë Sevigny. With more seasons planned as of early 2019, it doesn’t look ‘RuPaul’s Drag Race’ will be slowing any time soon, and it is sure to have a lasting effect on LGBTQ media across the world.

In the following 7 chapters, you will quickly find the {amountStatistics} most important statistics relating to "LGBTQ media in the U.S.".

The most important key figures provide you with a compact summary of the topic of "LGBTQ media in the U.S." and take you straight to the corresponding statistics. 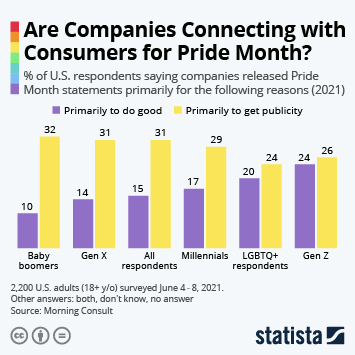