Media use in the U.S. - Statistics & Facts

Published by Statista Research Department, Nov 2, 2021
Consumers around the world spend an average of 463 minutes or over 7.5 hours per day with media. American consumers tend to average more time than most, as media is a major part of their daily lives. Although the ways in which media is consumed are changing, Americans still spend around 347 minutes per day with traditional media, along with 470 minutes of digital media.
More than 120 million U.S. households have TVs, with the largest local television markets being New York, Los Angeles, and Chicago. In fact, the weekly reach of TV in the U.S. is a massive 90 percent among all adults. Some of the leading networks are FOX, NBC, and ABC, which bring in millions of viewers and account for a significant portion of the information that U.S. consumers are presented with each day.

About 92 percent of American consumers listen to the radio at least once a week. This share is slightly higher amongst Americans aged between 35 and 64. The number of online radio listeners keeps growing among the American population, most notably among consumers aged 35 and below. Podcasts are more popular than ever as one of the rising audio format.

The amount of time spent on traditional media has been falling for years as consumers make the transition to digital media formats. Circulation of paid daily newspapers has more than halved since 1990, and many newspapers are beginning to try their hand in the digital market. The magazine industry is facing similar challenges to those of the newspaper industry; more and more consumers are interested in web based magazine content as opposed to print. One of bright spots for traditional media is the book industry. Although various new technologies such as audiobooks and ebooks have added diversity to the market, the majority of consumers still much prefer traditional paperback books.

Internet has experienced massively increasing reach and influence over the past 15 years, with household penetration rate growing from around 55 percent in 2003 to around 87 percent today. Around 300 million Americans use social networking sites, many of which have become their hub for finding news, media, and entertainment. With the rise of the internet, gaming has become even more popular, partially due to the increasing ability of video gaming to serve as form of social interaction. Over 250 million Americans use digital games as of 2020, and console gamers averaging over 14 minutes of game time per day.

In the following 9 chapters, you will quickly find the 58 most important statistics relating to "Media use in the U.S.".

The most important key figures provide you with a compact summary of the topic of "Media use in the U.S." and take you straight to the corresponding statistics.

Hispanic media in the U.S. 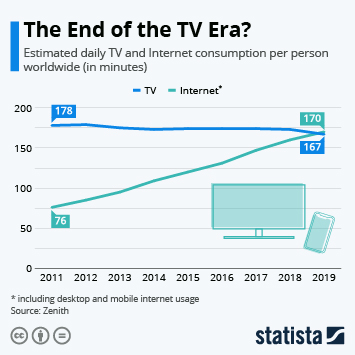 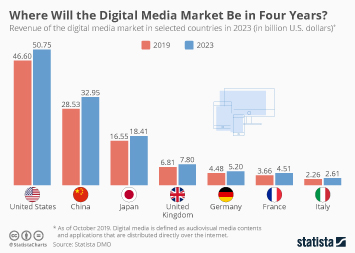