Women in Media in the U.S. - Statistics & Facts

Published by
Amy Watson,
May 8, 2019
The role that women play in media has become a hotly-discussed topic in recent years, with some alleging that there is an unfair bias towards men in this industry, both in terms of the opportunities they get and the money they receive. This can be most acutely seen in Hollywood, where the battle of the sexes re-emerges during every awards season. Since 2010, only two of the 40 film-makers nominated for the Golden Globe award for Best Director have been female
In addition to issues that women face concerning recognition for their work, many consider female roles to be oversexualized. Among the top grossing films in the U.S., around 36 percent of female actors aged 13-20 display some nudity and over 40 percent appear in sexy attire. These gender-related differences extend across nearly every aspect of the entertainment industry, and affect even the most recognizable faces in the world of cinema. Scarlett Johansson was the world’s best paid movie actress in 2018, taking home over 40 million U.S. dollars. However, these earnings pale in comparison the best paid male actors, like her fellow Avengers star Robert Downey Jr. who earned double that amount.

These gender diversity issues are arguably even more pronounced in behind-the-scenes roles. Only 19 percent of broadcast network programs employ female directors, and three quarters of all writers are men. Jobs in the streaming TV market seem to have even less gender equality, showing the widespread nature of the problem. In the music industry, less than 3 percent of producers are women, a share which has actually decreased since 2012.

Journalism has also failed to shake off its image of being a traditionally male-dominated industry, especially in fields like sports, technology, and international politics, in which a huge majority of journalists are men. This trend of underrepresentation can be seen across some of the largest newspapers in the United States, with publications like the USA Today and the Wall Street Journal having workforces which are over 60 percent male. Furthermore, in 2018, females employed within the publishing industry could expect to earn on average 27 thousand U.S. dollars less per year than their male counterparts.

In the following 6 chapters, you will quickly find the 40 most important statistics relating to "Women in Media ".

The most important key figures provide you with a compact summary of the topic of "Women in Media " and take you straight to the corresponding statistics.

Movie industry in the U.S. & canada 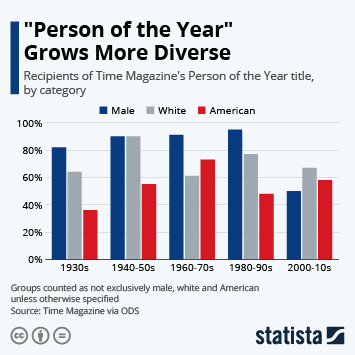 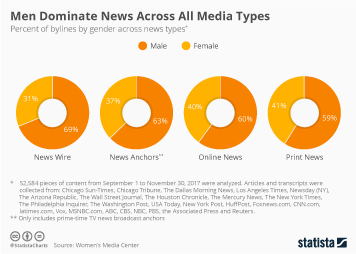