South Korea is one of the biggest markets for alcoholic beverages in the world – it is not a surprise given that drinking alcohol is often encouraged, if not even demanded, in both social and professional situations. Over the years, consumers at legal purchasing age spent an increasing amount per capita on alcohol. Beer was the most preferred type of alcohol, followed by Soju.

In 2015, South Korea had the highest per capita consumption of distilled spirits in the world. The most popular distilled spirit by far in South Korea is Soju: Soju is a South Korean distilled spirit and its sales makes up for notable amount of the total alcoholic beverage sales value in South Korea. Soju is a popular choice because of its relatively cheap price despite ongoing price increases and high availability. A 350ml bottle of Soju is often available for around two to three U.S. dollars. Recently companies have started selling flavored Soju to attract even more customers.

Wine market on the rise

Another topic worth looking into is the South Korean wine market. While imports have been increasing, industry reports show that the market benefits from growing health concerns among South Koreans, especially young female consumers. Red wine is considered to be the healthier choice than beer or spirits. Traditional South Korean rice wines, like makgeolli are increasingly considered outdated for younger consumers.

More than two thirds of South Koreans of legal purchasing age stated that they drank alcohol at least once a year. There is also a rather consistent share of adults who were considered high-risk drinkers, meaning they drank too much alcohol more than twice a week. In South Korea, alcohol has a high status in both social and professional settings and follows a strict etiquette rooted in Confucianism. One subculture of modern drinking culture is called hoesik. The term refers to a type of gathering in which people, usually colleagues, meet up after work and eat and drink together. Since companies often require their employees to work long days it became a subculture of South Korean work life. This custom is often criticized because employees might get forced to drink excessively and reports of harassment by their drunken colleagues or supervisors during hoesik have been filed. Due to changes in both law and company politics, the practice is getting milder.
This text provides general information. Statista assumes no liability for the information given being complete or correct. Due to varying update cycles, statistics can display more up-to-date data than referenced in the text. 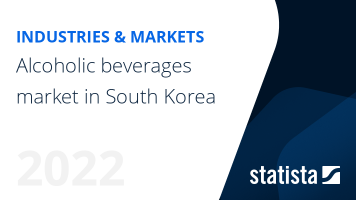 The most important key figures provide you with a compact summary of the topic of "Alcoholic beverages in South Korea " and take you straight to the corresponding statistics.