For many South Koreans, drinking alcohol plays a big part in their social life and for many even in their work life. It is unsurprising that South Korea is currently one of the leading markets in the world for alcohol consumption. While the wine market is growing, beer and Soju (traditional hard liquor) are consumed the most.

South Korea’s beer market is currently dominated by domestic brands. Based on retail sales value, Cass was the leading beer brand with the highest market share. Cass is a brand by the domestic market leader Oriental Brewery, which is currently owned by Anheuser-Busch InBev SA/NV. To fit the taste of Korean consumers, Korean breweries tend to focus on Lager-style beer with a low malt inclusion. To target the general mass, big Korean breweries produce low-price and low flavor beer. Although domestic beers made by large breweries are selling well, the imported beer and craft beer market are growing due to a change in preference.

Following several changes of beer brewing and distribution regulations, the local craft beer market is developing. The market share of small and medium breweries is still low compared to larger domestic companies, but the sales revenue of domestic craft beer is growing rapidly, almost doubling its sales revenue over the last two years. Taste is an important factor for its growing success: A survey in 2019 found that more than half of respondents stated that craft beer tastes better than regular beer. Nevertheless, the same survey found that Lager is the most preferred type of craft beer among South Korean consumers.

The change in taste and preferences not only led to a rise of craft beer, but also an increase in beer imports. Before the boycott of Japanese products in 2019, Japan was the leading country of origin for beer imports. The reason for that might be that many Japanese breweries focus on Lager-style beer; the familiarity of flavors could be the key for success in the South Korean market. Other strong importers are European countries such as the Netherlands, Belgium, and Poland, but also China. While beer companies China and the U.S. are often linked to other multi-national companies, many South Koreans believe that European beer is better tasting and of higher quality.
This text provides general information. Statista assumes no liability for the information given being complete or correct. Due to varying update cycles, statistics can display more up-to-date data than referenced in the text.

Nina Jobst
Research expert covering South Korea
Get in touch with us now
Published by Nina Jobst, May 10, 2022 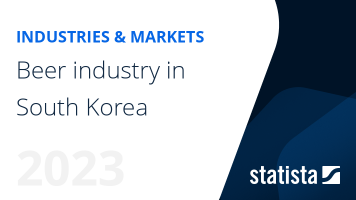 The most important key figures provide you with a compact summary of the topic of "Beer industry in South Korea" and take you straight to the corresponding statistics.